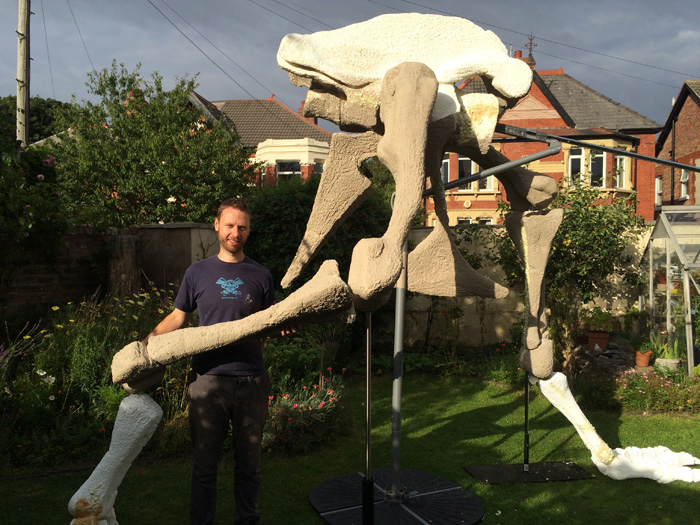 Dinosaurs at the Oldest Building in Merseyside!
A free half term exhibition 65 million years in the making.

From 26th to 30th of October, the oldest building in Merseyside will be welcoming a huge guest – a life-sized Tyrannosaurus rex skeleton! This 40-foot replica has been sculpted over six months by organiser Gavin Rymill and will be the centrepiece of a prehistoric installation for half term at the Birkenhead Priory.

The free exhibition will use a combination of artwork and science to portray the bones of dinosaurs and how they appeared in life. Several artists have been specially commissioned to produce paintings which will sit alongside replicas, diagrams and a few real fossils to illustrate how these animals lived and died. Britain’s prehistoric past will be explored via monstrous footprints, including some found on the Wirral, and displays will explain how the local geology fits into the wider view of palaeontology.On show earlier this year at the West Kirby Museum, the Wirral Museums Service are delighted to be able to offer a second opportunity for visitors to see the exhibits during the October half term. With its mix of strong visuals, life-sized fossils, scientific explanations and accurate exhibits, the exhibition is designed to appeal to adults and children alike.

Organiser Gavin Rymill explained how it all came together:

” I was in need of a new project and had this mad idea of putting a dinosaur. Unfortunately, a museum-quality T. rex replica costs about £800,000 and that’s a little beyond my budget but, as luck would have it, I’m a professional sculptor so I thought, ‘how hard could it be to make one?!’”

Gavin creates digital ‘sculpts’ that are 3D printed. For three years, he has worked on figurines that are 10cm high but carving on a large scale was totally new. The project has taken around 600 hours to put the creature together. The gigantic bones – some as long as five feet – were cut out of massive blocks of polystyrene which were bought from a waste centre. It took two vans to transport the blooks to West Kirby and a chainsaw to turn them into manageable sections before being shaped with smaller tools. The result isn’t a million-dollar, museum-quality replica but a surprisingly accurate skeleton.

Birkenhead Priory is in close proximity to Monks Ferry offering a view of the river from the ground. Picnics welcomed and bike rack available. The Birkenhead Priory precinct is only 15 minutes’ walk from Woodside Ferry terminal and Hamilton Square train station, free parking on site and pay parking on streets nearby but will be limited.

Wednesday – Friday – 1pm to 4pm
Saturday and Sunday 10am to 4pm
www.thebirkenheadpriory.org