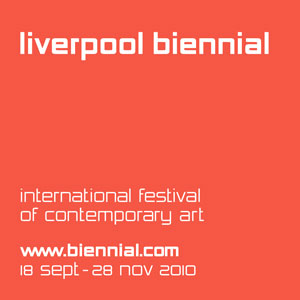 Liverpool Biennial is the largest and one of the most exciting contemporary visual arts events in the UK, and, with 975,000 visits in 2008, one of the best attended in the world.

Touched celebrates a decade of bringing new art to the UK through curatorial collaboration for the International show. It will involve more artists than ever before, while continuing to place an emphasis on commissioning ambitious new work from leading and emerging artists based outside the UK.

In addition to the ongoing emphasis on new commissions, there will be five special projects within the International:
Magdalena Abakanowicz will show an installation from 1978/80, previously unseen in the UK.

– Painters Aime Mpane, Oren Eliav, Tim Eitel, Edi Hila, Y.Z. Kami, and Zbynek Sedlecký will exhibit work not seen before in the UK under the title The Human Stain.

– The final act of Tania Bruguera’s legendary Cátedra Arte de Conducta from Havana will take place over the 10 week period of the Biennial, with continuing actions by 20 Cuban artists recreating Allan Kaprow’s Happenings and staging new performances and events.

– For the first time, Liverpool Biennial has commissioned an artist – Carlos Amorales – to be responsible for the visual concept for marketing Touched.

Touched will consist of art that succeeds in affecting the viewer: art that is close enough to us to move us in mind, body and soul. And with over half the commissions situated in disused shops and warehouses, a feature of Liverpool Biennial since its inception in 1999, the viewer will be touched by art in the most unexpected places!

Lewis Biggs, Artistic Director, comments: ‘Focusing on the qualities of art that affect the viewer, the curatorial team for Touched has investigated materiality, metaphor, duration, embodiment, family, narrative, separation, desire, attachment, craft, compulsion, viscerality, neurosis and, especially, emplacement. We’ve been touched in the head and in the gut; and we’ve traced the trajectory of a feeling from a sensation in the hand to an emotion in the heart. We have felt the beauty of proximity.

If Marcel Duchamp had been satisfied with art as immaterial concept, he wouldn’t have spent the last two decades of his life creating his installation Etant Donnés (Philadephia Museum of Art). As he commented two years before his death: A work of art is dependent on the explosion made by the onlooker. We believe the artworks commissioned for Touched will provoke many explosions’.