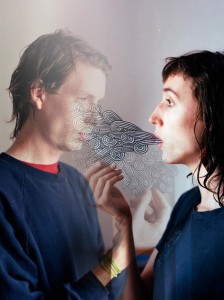 Lucky Dragons is an experimental music group consisting of Luke
Fischbeck and Sarah Rara. Based in Los Angeles, California, the band
are noted for their unusual sound, described as having the ability to
make “‘everyday sounds’ become alluringly other”. Lucky Dragons’
performances include live music, video projection, and sounds created
in collaboration with the audience. They have performed at the Smell,
Echo Curio, Dublab, at major international art institutions and at the
2008 Whitney Biennial.
They will be supported by Liverpool based ensemble Ex-Easter Island
Head, a duo composing and performing music for solid-body electric
guitar, percussion and other instruments.

Adv. Tickets £6 are on sale at the Wolstenholme Creative Space
Website: www.wolstenholmecreativespace.com

Wolstenholme Creative Space; The Right Way: A Film by Fischli and...

Wolstenholme Projects – Black and White in the Grey Area