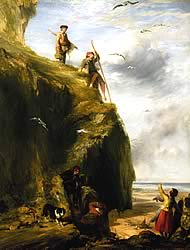 ‘Returning from the Haunts of the Seafowl’, by William Collins

‘Birds’-nesting, the subject of ‘Returning from the Haunts of the Seafowl’, was a popular pursuit for young boys in the late 18 and early 19 centuries, and was equally popular as a subject for artists portraying children. Collecting eggs, as a form of classifying natural phenomena, was a hobby that exemplified the age of Enlightenment’s spirit of scientific enquiry; but birds’-nesting also partook of the Romantic era’s demand for closer and more immediate contact with nature, involving as it did physical exertion and even mild danger in the act of climbing to awkward locations.’