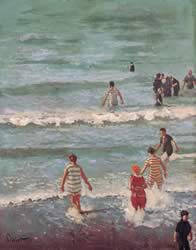 ‘This picture is one of a series of six large Dieppe subjects that were commissioned by M. Menton, the proprietor of the Hotel de la Plage (later Metropole) to decorate his hotel restaurant. Menton disliked the pictures so much that rather than installing them he sold four of them, including this one, to an American artist, Frederick Fairbanks, who was married to a friend of Sickert’s. The Walker bought this picture in 1935 – the same year that a Sickert exhibition was held at the gallery.’