We went to the launch of Abandon Normal Devices at FACT last Friday, its all very exciting though it doesn’t actually take place until late September.

AND is presented by FACT (Liverpool), Cornerhouse (Manchester) and folly (Lancaster), great to see a major collaboration across the North West region. It is also part of WE PLAY, the NW cultural legacy programme for the 2012 Olympic and Paralympic Games.

Launching in Liverpool 23-27 September 2009, AND features screenings, installations, online projects, public realm interventions, debates, workshops and live events, with a distinctive emphasis on critique and ideas. At the heart of this festival lies a fascination with ideas about social, physical and technological norms with approaches from the playful to the downright provocative.

Featured highlights include: First UK solo exhibition from Thai filmmaker Apichatpong Weerasethakul; European premiere exhibition from digital interrogators The Yes Men; world premiere of Jamie King’s new feature film Dark Fibre, a much anticipated appearance from Carolee Schneemann and Krzysztof Wodiczko’s return to the UK with a breath-taking outdoor projection. Also an outdoor performance on the waterfront by DJ Spooky and much more. 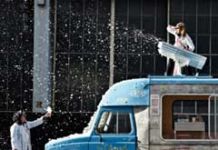