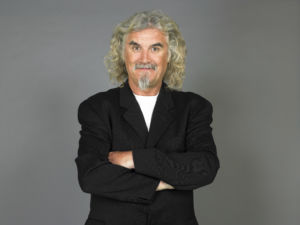 Liverpool city centre art gallery, Wall to Wall located in the Metquarter, is excited to announce the launch of the latest artworks from the BAFTA nominated actor, comedian, musician and presenter, Billy Connolly, CBE – a collection of six limited edition prints.

Following the success of his first collection, Born On A Rainy Day, in March 2012, Connolly’s second foray into the world of contemporary art tells a tale of evolution as influences from a busy year, including filming on The Hobbit, come into play.

Connolly first began to sketch on a rainy day whilst on tour in Canada in 2007 and pursued it with a keener interest in 2010 when he began work on Born On A Rainy Day.

His second collection reflects an evolving style and experimentation with composition and colour. The faceless characters remain but the new pieces reflect themes of folk tales and fables – which isn’t surprising given that most of them were created whilst on location in New Zealand where Connolly was filming The Hobbit.

Commenting on his passion for drawing Connolly said: “I still think of it as a luxury, really. It’s like meditation. Sometimes I’ll be out or doing something, and then I think, ‘I’ll go and have a draw now.’ I like the isolation of being alone, on a page.”

Jen Spencer, gallery manager at Wall to Wall Gallery said: “Billy’s first venture into fine art met with critical acclaim, and we’re thrilled to work alongside him to publish and exhibit his second stunning collection.

“Particularly evident in his most recent six pieces is the development of his highly distinctive, intricate style, which sees the addition of colour for the first time. His faceless figures are now joined by wings, birds, a banjo – and the collection even includes a self-portrait. Self Portrait With High Horse is characteristically faceless, yet clearly identifiable as Billy by the trademark hair, goatee and glasses. We’re sure this piece in particular is set to make waves.”

Other pieces in the collection include Fly Away Peter, which features a faceless subject providing a perch for a number of characterful birds, and And On Monday, God Made The World, which sees ‘God’ as a welder.

Two For The Road features a banjo player and an accordion player standing together in mutual companionship, and Glaswegian Icarus sees a squat, muscular, slightly raffish figure dwarfed by elaborate feathered wings, seemingly ready for flight.

The pieces in the collection will be available to view and purchase on 30th March from Wall to Wall Gallery, on the ground floor of the Metquarter, as a limited edition of 95 hand-signed framed prints starting from £625. For more information please contact Wall to Wall Gallery on 0151 227 4844.

dot-art Teams Up with LFC and 25 Local Schools to Create...