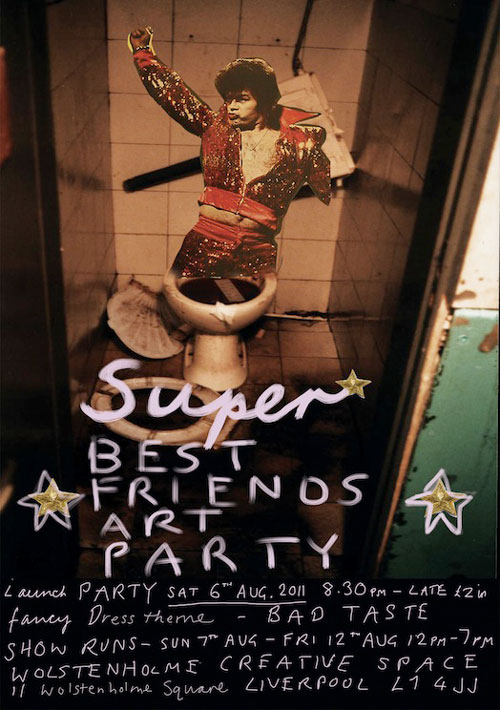 The Super Best Friends have been bestest pals for going on 500 years!
We have an enormous room full of art-work, film and costume we want to share that’s so Bad Taste it’s either pure genius or piss funny.

Some of our oldest gang members will also be returning for some specially commissioned sculptures and installations.

To set the right tone we are hosting a Bad Taste Art Party on Saturday 6th August. It will feature a brand new set from the Super Best Friends Party Band as well as live performance from Micheal Flatknee and the Funshine Community Dance Troupe sporting some of the worstestest fashions ever. £2 entry.

The Super Best Friends first formed in 2003 in an effort to combine Art and Party and fight boredom and apathy in contemporary art and culture.

‘In a world filled with mediocracy these guys have broken the mould by being utterly shit’ –  Jo O’meara, singer S club 7

‘They have the ambition of a Hollywood film director but the budget of a lousy bum‘ – Woody Allens, Hollywood.

Last stop on an exhausting 9000 venue ‘Save the flippin World’ tour with Rod Stewart, the S.B.F’s are finally back in Liverpool with a ‘Bad taste’ art party that boasts around 80 fine art pieces, a live covers band and a flying Micheal Flatknee, this shit is a must see.

Wolstenholme Projects – Black and White in the Grey Area