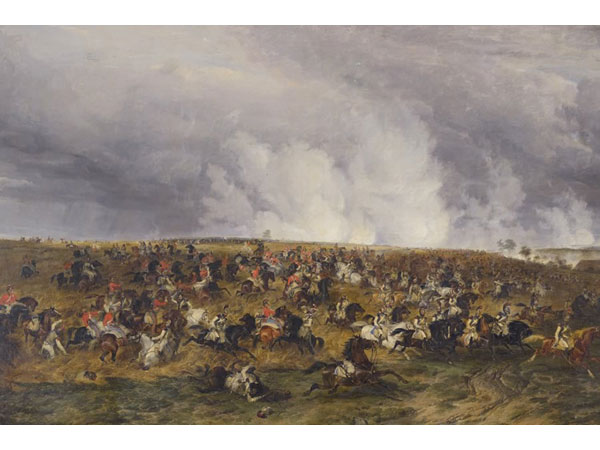 The National Army Museum and Liverpool’s museums join forces to mark the 200th anniversary of the Battle of Waterloo with special displays.
Objects on display include Eagle standard finial of the French 105th Infantry Regiment.
Partnership is part of a nationwide programme of Waterloo commemoration.

“We’ve thoroughly enjoyed putting these exhibitions together, and want as many people as possible to engage with the personal stories that were shaped by the battle and its aftermath.”
Colin Simpson, Curator of the Williamson Art Gallery & Museum, Birkenhead, said:

“We have had our large painting of the Battle of Waterloo on display for years and it is great to have an opportunity to tell the story of the men who are shown in the painting and put it into context. The National Army Museum loans are of the real objects shown in the painting and we are also showing alongside items from the Williamson’s collection that have not been seen for many years.”
The National Army Museum, in partnership with the Waterloo 200 Charity, Culture 24 and the Heritage Lottery Fund, has also recently launched Waterloo200.org as a central website for all Waterloo commemorative events this year. The website features an online gallery of 200 unique Waterloo artefacts, including the Duke of Wellington’s boots, an eagle standard captured in the battle and the original blood-stained saw used to amputate the Earl of Uxbridge’s leg.

The Waterloo Lives activities are part of a nationwide programme of commemorative activities and events produced by the National Army Museum to commemorate the 200th anniversary of the battle. The programme will include entertaining and informative performances, film screenings and a nationwide quiz, all with the aim of bringing the legendary battle to life by connecting audiences with the impact of the battle on the individual, the community and society. More information on the programme can be found at www.waterloo200.org/WaterlooLives

The Battle of Waterloo was waged on a sodden field in Belgium on 18 June 1815 when the Duke of Wellington and his forces halted the advance of the French Army. Significant for many reasons, not least because it saw the end of Napoleon’s reign and heralded a long period of peace across Europe, the battle also marked an important stage in the development of the British Army because of the recognition each soldier received.

The National Army Museum’s Battle of Waterloo activities are part of the Museum’s Building for the Future project*, which will see a radical transformation of the Museum’s offer. The project is being carried out thanks to a grant from the Heritage Lottery Fund (HLF), whose support has enabled the Museum to go on the road during its closure period, taking projects such as the ‘Waterloo Lives’ on tour.