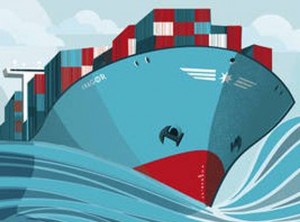 Down To The Sea In Ships – of Ageless Oceans and Modern Men is the story of two voyages Horatio took on Maersk container vessels as writer-in-residence. Part travelogue, part nature-writing, part history, part study of the world of shipping and seafarers, the book is ‘both romantic and realistic’ (The Independent), ‘stupendous and extraordinarily exciting’ (The Times).

Horatio Clare’s first book, Running for the Hills, won the Somerset Maugham Award in 2007. His more recent A Single Swallow and Down to the Sea in Ships were widely reviewed and acclaimed.

Rhiannon Evans, who introduced Horatio to the work of the Friends of the Williamson, said: ‘We are delighted to have Horatio speak on ‘Timelines’, the third Williamson Talks series. I am sure the audience will be enthralled to reconnect with Birkenhead’s tremendous shipping history through Horatio’s stories of the ageless sea and present-day seafaring. Horatio’s support for the Friends’ effort to increase the role of the gallery as a vibrant cultural centre at the heart of Birkenhead is much appreciated.’