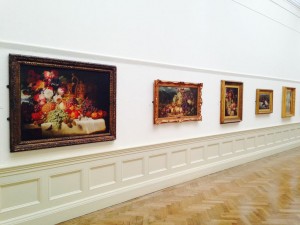 Exhibition of still life painting featuring the opulent works of fine artist, George Lance, alongside other works from the gallery collection.

Born in 1802, George Lance achieved a very prominent position in British painting: hailed by JMW Turner as one of the three greatest colourists of the English School in his era, and patronised by the Dukes of Marlborough and Bedford but also by many middle-class buyers.  Still-life in art has a history going back only a couple of centuries before George Lance. Objects were often included as props or backgrounds in portraits or religious pictures, but from the 17th century Dutch painters in particular made the still-life a serious subject for study, often with the idea of a ‘memento mori’ or reminder of how short is life. During the 18th century in most circles these fell out of favour and Lance, almost single-handed, revived the fashion and had an influential and wealthy clientele.

George Lance died in 1864 and is buried in Flaybrick Cemetery, Birkenhead. He had enjoyed some success exhibiting in Liverpool, winning the Academy’s prize in 1837, and his son was living at the time in New Brighton but most of his life and career were spent in London.

Still-life painting continues to this day, though more often as a subject for amateur painters than professionals. It is open to experimentation and this selection drawn from the Williamson’s own collection shows a wide variety of approaches over the last 150 years. Many of these are by local artists, as they are featured heavily in our collection, but that does not mean that the work is provincial or sub-standard. Changes in style, subject and technique reflect changes in artistic ideas across the period. One of the contemporary artists featured who is Dennis Spicer who is based in West Kirby and specialises in still-lives, nudes and portraits.

The George Kennerley painting was recently given to the gallery by Mr Barry Owen (of Mason Owen Property Consultants, Liverpool) through the Art Fund.  George Kennerley was one of the founders of Vernon’s Pools and lived for a long time in Caldy; the painting hangs alongside another Still-life by Kennerely from the Williamson’s collection.

Williamson Art Gallery: Doesn’t look like a book / Hidden in...