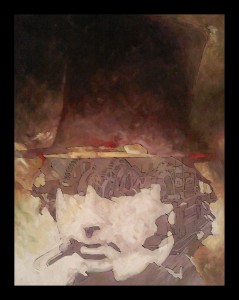 Daniel Craig and Derren Brown will be among the stars in a new exhibition at the Williamson Art Gallery, managed by local arts organisation dot-art. The first solo show at the gallery by Liverpool-based artist Stephen Collett, “20 Shades of Collett” is a collection of portraits featuring the people who have most inspired him including the James Bond Star and the devil-bearded illusionist. The portraits have been produced using a range of innovative methods to reflect the characteristics of the figures portrayed. William Shakespeare has been created with words rather than brush strokes; Derren Brown emerges from an optical illusion and Sir Richard Branson has been painted using a credit card rather than a brush.

Collett says: “The reason I decided to do this show is because the question I am always asked is “what inspires me?” People often expect me to list famous artists so they are surprised when I name movie stars, businessmen, mathematicians and engineers. I always try to think beyond the obvious; I may approach portraying a subject on canvas in much the same way that David Tennant might approach portraying a character in a drama, or I may tackle artistic challenges in a similar way that Isambard Kingdom Brunel might have confronted an engineering problem. However, the most important thing for me is to make my work accessible. For me, art should be enjoyed by everyone not just by a so-called “cultural elite.” This is at the heart of everything I do.”

Stephen Collett (30) has exhibited his work in galleries across the world including New York, Paris and Berlin. Recent high profile commissions include a collective portrait for property developer Iliad and two sculptures for new park and ride schemes.

Williamson: Waterloo Lives: The Story Behind the Painting