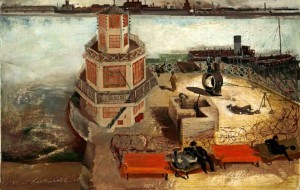 Albert Richards (19 December 1919 – 5 March 1945) was born in Liverpool but moved to Wallasey as a small boy and attended Wallasey School of Art 1935-39 when he won a scholarship to the Royal College of Art. After only 3 months, he was called up into the army where he served in the Royal Engineers before transferring to a Parachute Brigade and in 1944, he was appointed an Official War Artist. He was the youngest of the three British official war artists killed during the conflict.  On March 5th 1945 he drove his jeep into a minefield and was killed, aged only 25. This is a small selection of work by Richards, both from student days and during the Second World War.

Image credit: A searchlight battery at the end of New Brighton Pier, 1942

Williamson Gallery: Watercolours at the Williamson