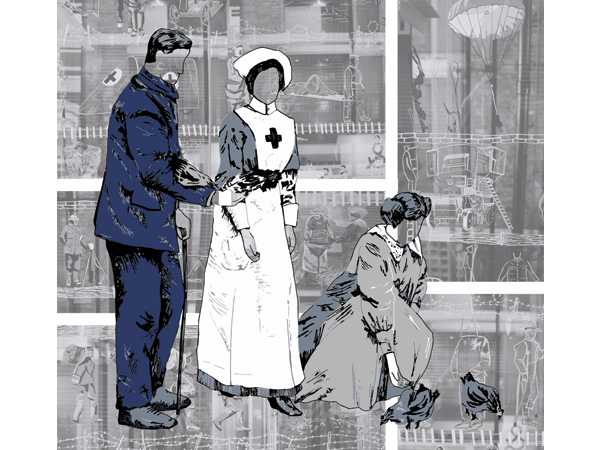 Taking World War One poet Wilfrid Owen’s words “My subject is War …and the pity of war” from his draft preface to the collection of poetry that he hoped to publish in 1919 (this was to be an unfulfilled ambition as Owen was killed in November 1918, just days before the Armistice), as her show’s title, Emma Brown explores the ordinary lives of men and women through beautifully executed illustration.

Just as Wilfred Owen wrote that his intention as a poet was not to write about“..deeds, or lands, nor anything about glory, honour, might, majesty, dominion or power, except War”, Emma Brown’s inspiration as a visual artist is to be found in the ordinary and the commonplace.  Her two month long period of research took her to the town’s archives, Warrington Museum & Art Gallery’s exhibition It’ll Be Over By Christmas, to local history groups and to contemporaneous issues of the Warrington Guardian to discover local stories of young men and women enlisting and those remaining behind on the Home Front.

Emma’s technique involves drawing either in pen or pencil or with stick and ink; this is then combined with collage or paint using digital methods to layer the various elements of the image.  She also uses animation in her work. Her work features silhouetted or faceless characters. This creates a sense of anonymity, and although the drawings started out as original photographs and stories of actual events, the faceless figures detach the story from its origin and then, perhaps, enable the viewer to imagine their own family or a character of their own making involved in the event . Besides siting a final exhibition in the town’s Pyramid Arts Centre (Saturday 18 July – Saturday 29 August), Emma also took her work into Golden Square, the town’s shopping centre, as well as to local council offices in an echo, perhaps, to the ubiquity of the war during the period.

Emma’s pursuit of a career in illustration stemmed from her love of drawing and making images to tell stories. Her varied inspirations include landscapes and surroundings, series of objects or creatures.  She consistently returns to her love of storytelling in her projects, seeking out narratives that can be interpreted in a visual way, whether through fact or fiction, local history, poetry or a single line of text.  As a graduate from Manchester Metropolitan University (MMU), Emma’s work as a freelance illustrator and artist includes a postcard project MindtheSex for the Wellcome Collection’s Sexology season and the group show Forming Words for Manchester Craft and Design Centre.