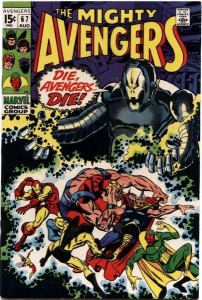 Display of 12 comic book cover prints featuring The Hulk, Spider-man and The Avengers, which make up the second instalment to ‘Superheroes’ – a collection of prints from Marvel’s comics – and will be available to buy at the gallery.

These classic comic book covers, which were originally created in the 1960s, are now available as prints to collect. This collection features some of the most memorable characters ever created during Stan Lee’s reign at Marvel, which remains America’s largest comic book publisher to date. Unlike other comics at the time, Stan Lee made superheroes relatable; he humanised them and conveyed their everyday struggles. Peter Parker addressed the issues of social acceptance and personal identity, The Incredible Hulk was a reflection of society’s fears regarding a nuclear war-ridden age; and The Avengers were formed to combat a threat no individual could defeat

Wall to Wall Gallery: ‘Born On A Rainy Day’ Billy...