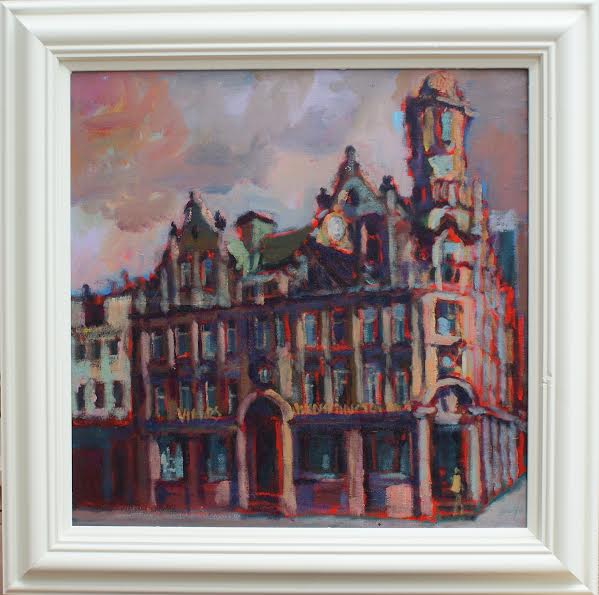 Celebrated artist Stephen Bower travelled to Liverpool for a memorable pub crawl, swopping pint pots for paint pots. The result … a collection of oil paintings in Stephen’s own imitable style of some of the city’s most famous watering holes.

Stephen braved cold March winds as he worked in the streets with his easel and palette, buoyed by the warmth and friendship of Liverpool people happy to see an artist at work

Working outside the Empress in Dingle – a pub made famous by ex-Beatle Ringo Starr – the licensee ensured a constant supply of hot drinks to fortify the artist as he worked away on the pavement in North Hill Street.

Stephen will be present at the opening of his exhibition on Thursday, May 7th from 6pm until 9pm. The exhibition will then be on free show each Friday and Saturday, noon until 5pm until July 25, and at other times by appointment with the gallery.

Ma Egerton’s, the Lion in Moorfields, the iconic Vines in Lime Street, Peter Kavanagh’s off Catharine Street are just some of the famous public houses painted by Sheffield-born Stephen who lives in Devon.

Stephen studied art at Manchester College of Art, too late to realise he should have opted for a course along the M62 at Liverpool’s School of Art.

His passion for Liverpool, apart from the city’s architecture, was also helped by a commission he received to paint John Lennon’s Aunt Mimi when she was living in Bournemouth after leaving Mendips in Menlove Avenue. Those works are now in the hands of private collectors.

So why did Stephen make the 270-mile journey to Liverpool to paint some of the most photographed buildings in the city?

Stephen, who describes himself as a colourist, explained: “I wanted to capture the colour and the vibrancy, and the very souls of the pubs I painted. The best way to do that is to visit each one and paint what I see, there and then. The paintings are my own interpretation of the buildings. I dislike using photographs and prefer to base my colour compositions on direct observations.”

Stephen takes his inspiration from artists such as Monet and works in oils, built up in successive layers, producing striking and vibrant works.

The View Two exhibition is also a homecoming for Stephen whose art work made its debut in Liverpool in 1974 at the Northern Young Contemporaries exhibition. Since then his work has been shown in places such as Grenoble, Paris, Monaco and across the UK.