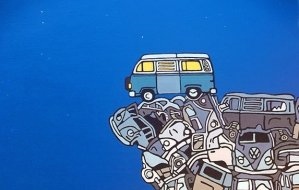 8 August – late October 2014
Fridays, Saturdays and Sundays 12-5pm
Free
Liverpool JMU arts graduate Matt Wilde is celebrating the 65th birthday of one of the world’s most icononic favourites, the VW Campervan. Hundreds of thousands of campers are still on roads in every continent, despite many reaching or nearing pension-age. Matt Wilde uses oil paintings of camper vans in his latest collection of works, created to illustrate the recession.
Volkswagen introduced the VW Combi, as it was called, at the Geneva Motor Show in 1949, with production starting the following year. Over six decades it was one of the most versatile vehicles on the planet, loved by globetrotters, hippies, pop groups and anybody with people and stuff to move around. More than 3.5m were built between 1950 and last December when the final batch rolled off a production line in Brazil.
Matt’s work has been inspired by everyday urban surroundings, daily commutes, consumerism and waste issues.
View Two, 23 Mathew Street, Liverpool
Advertisement