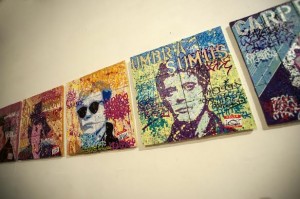 So far, Paul has been exhibiting images of famous male icons and now it’s the turn of the Livergirls, as the artist adds newly finished works of a selection of women with links to the city, from Cilla Black and John Lennon’s first wife Cynthia, to Kate Robbins and Mona Best.

Brought up on an Ellesmere Port council estate, residing in Chester and well travelled in between, Paul Terence Madden charged headfirst through the dizzy world of the music business. His days were spent on graphic design, his nights watching rock bands like the Sex Pistols.
Being from Merseyside means the Beatles are in there as well, explaining why his life really was a case of eight days (and nights) a week. He played in numerous bands as lead guitarist and even managed big-name group Boys Wonder, winning them a recording contract.
Life turned out a long and winding road for Madden, from the day he left Ellesmere Port, studying at Chester Art School (where he and Deaf School bassist Steve Lindsey met and became life-long friends). Lindsey followed in the footsteps of Lennon and went to Liverpool School of Art, Madden headed to the London College of Printing.
From there a graphic art studio in Soho became his workplace, surviving on four hours sleep a night.
A decade ago Madden embarked on his passion for paintings, all in gloriously expensive Golden Acrylic paints. The result is a collection of almost 40 works, Bowie, Sid Vicious and Strummer, are all there along with McCartney, Lennon and even Kraftwerk. The paintings of Madden’s rock heroes are more than pictures. Look closely at the faces on the canvas and read the stencilled lyrics, embellished with touches of semi-legible graffiti – a fusion of art and calligraphy.
Further details: www.viewtwogallery.co.uk