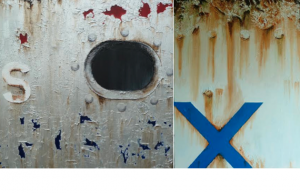 Birkenhead artist and urban explorer Thom Gorst is bringing new life to once familiar sights on the Mersey, the Manxman and the abandoned Royal Iris ferryboat.

While some people want to see the two old river favourites restored to their former glory, Thom has found a beauty in their current, rusting and dilapidated state. He has made an art out of recapturing maritime cast-offs in paintings, with a growing queue of fans eager to own one of his works.

Rather than a requiem for the past, his paintings are a celebration, and in November a selection will be going on show in Liverpool at his debut show on his home patch, described by Thom as a’ real homecoming’.

Glance at the exhibits and it may seem Thom Gorst has used a welding torch to clinically slice a section of an old ship. Look carefully and the works are beautifully created paintings in acrylic, adding a gracefulness to something seemingly abandoned and left to decay in a corner of a faraway shipyard.

“We are conditioned to look at these forgotten ships as ugly, but look carefully and they are beautiful. I am trying to argue we don’t need to preserve these ships, there is a lot to be said for letting them grow old gracefully. I have taken the view you can never retrieve the past. It is also true to say dramatic art can be made out of what is seen as old junk.”

Born in 1952 into a seafaring family, Thom’s father was a master mariner working on the tankers used to import molasses into Britain. The family lived in Wirral, close to the docks. Educated at Birkenhead School, Thom left in 1969 after a dismal display at A-levels, evidently not cut out for university. Instead he spent four years in the Royal Navy, serving on frigates, a minesweeper and an aircraft carrier. Unlike three of his naval college classmates he never made admiral.

Instead he became an architect, aligning himself with the political left, and still today committed to the notion that architecture is a public art. He worked for Greater London Council (GLC), working on a controversial project known as Coin Street. This turned out to be a ‘cause celebre’, bringing the team into direct conflict with Margaret Thatcher’s government.

“As a direct result of what we were doing at the GLC, she abolished it in 1986,” said Thom, who displaced from the abolish authority, ended up as Assistant Borough Architect in Southwark where he led another high profile housing project in Bermondsey.

Then in 1989 he became a full time university lecturer, eventually becoming a professor and earning a doctorate. That family seafaring blood in his veins took Prof Thom back to the high seas – this time lecturing on architectural history to passengers aboard the ocean going Cunard liners.

His doctorate at the Glasgow School of Art involved an investigation into the aesthetic content of modern maritime ruins. It was during this period, between 2005 and 2011 that Thom established his own art practice, addressing decay on maritime and industrial surfaces. That in turn led to his fascination with abandoned vessels such as the Iris and the Manxman, and other ships that once proudly graced the seas