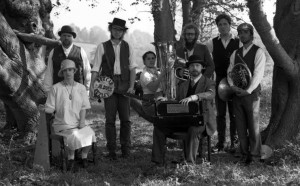 Americana from the 19th and 21st centuries- Bohemian Bristolian hobos sing songs about the moon; a solo guitarist plays the music of Philip Glass.

An amazing 8-piece band from Bristol. If you read between the lines then its all in the title; full-on Americana (banjos, harmonium and a musical saw) mashed up with a peculiarly English sense of songwriting, storytelling and, dare we say it, drug-induced decorum… This is a great band.

Boxcar Aldous Huxley have spent half a decade honing a sound that has been described variously as “a Victoriana Cardiacs”, “Horror-Folk” and “decidedly strange.” An eight-strong troupe of wildly varied players thrown together in a fit of spontaneity and experimentation, their different backgrounds have resulted in a crazed songwriting machine, starting off in Tin Pan Alley and heading determinedly off course.

“Boxcar Aldous Huxley’s ‘Hora’ alternates from sounding like something from a mid-eighties Tom Waits album to a gypsy jazz take on ‘Trout Mask Replica’.” The Active Listener

A bold new set from a well-know local guitar virtuoso.

For Lost Voices he will perform for the first time three new transcriptions of pieces by Philip Glass (Opening from Glassworks, Metamorphosis Part 1 and Modern Love Waltz). Continuing the minimalist theme his set will also include Erik Satie’s Three Gymnopedies and a powerful new version of Steve Reich’s Electric Counterpoint (Acoustic Counterpoint) for live guitar played against a visually projected performance film.