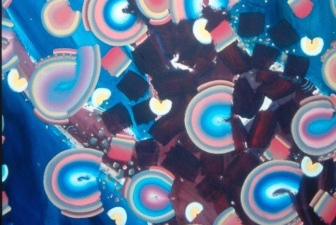 Liverpool artist Peter Corbett has been making abstract images for over 40 years. Since 1987 his work has been based on a unique technique he calls ‘double edging’, which involves using two colours on a brush at the same time. He also uses a build-up of paint and glazes to create complex images. His pictures often include organic shapes and a saturated blue background.

Corbett is interested in a wide variety of subjects which influence his work, including scientific research and philosophy. A student of meditation, many of his works are attempts to convey experiences which most people have not shared. ‘The manifestation of higher states of consciousness are hard to fully describe in words, however paintings can give an expression of them..’

This exhibition brings together key works from across Corbett’s career, together with examples of his complementary poetic writing.