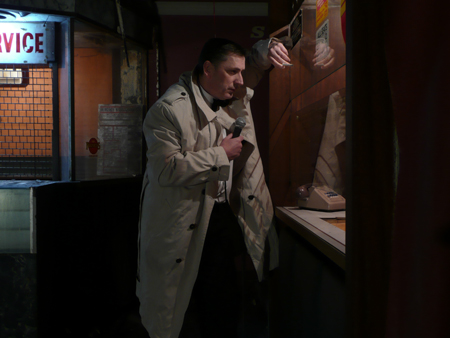 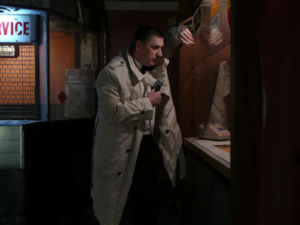 LIVERPOOL, UK – 14 September 2012:  An exhibition by moving image artist, Paul Rooney, will go on display at the University’s Victoria Gallery & Museum (VG&M) as part of the Liverpool Biennial 2012.

`Here Comes Franz’ is an exhibition of moving image, sound and text by Liverpool-born artist, Paul Rooney, which explore the passage of time and the relationship between memory and identity.

The exhibition features six recent works by Rooney which focus on the absurd, imagined nature of social and individual remembrance.

The film work, `The Futurist’, is the main focus of the exhibition.  ‘The Futurist’ is a 25 minute film inspired by the real derelict Liverpool cinema of the same name using fragments of performance from stand-up comedians to explore the hold of the past on the present.  It presents film-noir style scenarios and images which explore the deeply unsettling power of the past – in both a historical and a psychological sense – to undermine the comfort of the present.

To celebrate the Liverpool Biennial 2012, Paul Rooney has also created a new and unusual piece of artwork using the external changing light sequence on the University’s Active Learning Lab on Brownlow Hill.  `He was Afraid’ creates a sequence of international maritime signal flags flags which form a word relating to the works on display in `Here Comes Franz’.  The Active Learning Lab is lit with hundreds of colour-changing LEDs. It is a colourful addition to the Liverpool skyline and can be seen from the Wirral and on flights to and from John Lennon Airport.

Moira Lindsay, curator of the exhibition said: “The VG&M is delighted to be exhibiting recent works by Paul Rooney.  `The Futurist’ was purchased  through the Contemporary Art Society’s Acquisition Scheme and is the first moving image work to enter our collection, yet it forms a superb link to other historical parts of our collection through its use of the architectural spaces of Liverpool, its history, and the consideration of memory and time.

“Paul’s unique contribution to the Liverpool Biennial 2012 which uses the University’s Active Learning Lab to create a new piece of work is an exciting addition to the programme.  We hope that it will act as a beacon, drawing people from across the city to the VG&M  to work out what it spells.”

The Liverpool Biennial 2012, the UK’s largest international arts festival, will present work by 242 artists in 27 locations. The festival takes place in galleries, museums and sites across the city and includes a dynamic programme of talks, events, screenings and family activities. Over 150 artists are involved and is forecast to attract over 600,000 visitors over 10 weeks.

Paul Rooney trained at Edinburgh College of Art and won the second Northern Art Prize in 2008.  He has produced a book of fiction, Dust and Other Stories, to accompany the exhibition and this is available to purchase in the VG&M.

`Here Comes Franz opens to the public on Saturday, 22 September and runs until Saturday, 22 December 2012. Admission to all galleries and exhibitions at the VG&M is free and the building is open Tuesday – Saturday, 10am – 5pm.