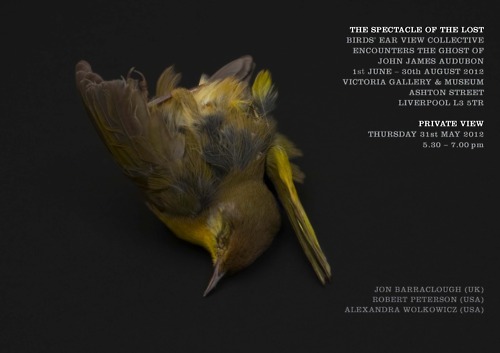 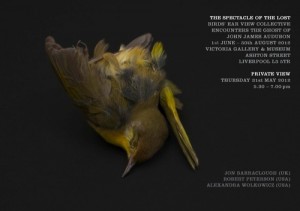 Birds’ Ear View collective cordially invites you to the private view of The Spectacle of the Lost on 31st May at the Victoria Gallery & Museum in Liverpool.Featuring work by artists Jon Barraclough, Alex Wolkowicz, Rob Peterson … and 19th century artist and ornitholog…ist John James Audubon.
Curated by Laura Robertson.The Spectacle of the Lost confronts our disconnected and fractious relationship with animals and the natural environment and asks, is the spectacle of nature in art our last way to rediscover this connection?

Through his obsessive observation, drawing and recording of birds in 19th century America (which included shooting, skinning and stuffing the birds himself), Audubon’s artworks are a monument
to the disappearance and fragility of birds as a species. Audubon developed a deep appreciation of nature from early childhood, painting birds in a signature life-like manner that was to overshadow contemporaries and predecessors. His significant influence on ornithology and natural history extended to being quoted by Charles Darwin in On the Origin of Species, while Audubon’s field notes are regarded as having made a major contribution to the understanding of bird anatomy and
behavior. Whilst in the UK to produce and sell his book Birds of America, Audubon spent a significant amount of time in Liverpool with the Rathbone family, hence the exquisite collection of work in the Victoria Gallery & Museum’s archive.

Birds’ Ear View is an ongoing, multidisciplinary, collaborative art project about birds and the skies above NYC. It investigates the relationship between man and nature and how we have
become disconnected from the messages, symbolism and allegory of our natural world. The project aims to gain a deeper understanding of what it is like to be a bird co-existing with us in
the city and what birds mean to us humans in the context of history, science and spirituality.

VG&M: Nothing Beautiful Unless Useful