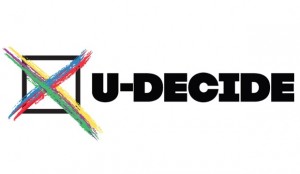 A politically-engaged programme of work at Liverpool’s Unity Theatre.

For General Election Week 2015, Unity Theatre presents U Decide: a festival of theatre, debate and specially commissioned work designed to engage audiences with the key issues surrounding the election. The programme, which features leading theatre companies and artists including Paines Plough, Pentabus and Chris Thorpe, aligns with the history of the Unity Theatre Movement’s mission to bring contemporary social and political issues to people in the street.

Each night will feature a mix of performances and talks as well as a specially commissioned ‘Ballot Box Ballad’ by a Liverpool-based artist covering themes from Welfare and Cuts to Immigration. The festival aims to inspire dialogue, dissent and interest in the democratic processes unfolding at that very moment. Performances include quick-response satire, interactive shows, dialogue with political extremism, musical comedy and a chance to hear the voice of those aged under 18 who can’t yet vote.

Unity Theatre, Liverpool is a small-scale theatre with big ambitions. Led by long-standing Artistic Director Graeme Phillips, their programme of presented and produced work is edgy, radical and unashamedly contemporary, while their talent development programmes have aided the establishment of many of the UK’s top touring companies (including Told By An Idiot and Theatre Ad Infinitum). Recent successes have included productions of Chris Chibnall’s Gaffer, Bruce Norris’ Clybourne Park and an international touring production of David Yip’s Gold Mountain.

The spring 2015 season is Graeme Philips’ last as Artistic Director at the Unity Theatre, Liverpool and to celebrate his 30 year tenure, he has invited China Plate to work with him to create this exciting week of politically motivated work.

Each night we will present a specially commissioned Ballot Box Ballad by a Liverpool based writer or theatre maker reflecting a personal passion in relationship to the election.

What if…?| Collective Encounters

The rich get richer, the poor get poorer, democracy is dying, but can it be saved?  Do you dare to dream?  Be brave!  Join the procession and fan the flame. A promenade performace.

Sheriff led by Nick Walker: A brand new on-the-fly theatre collective, which makes work very quickly in response to the major issues of the week.

“As light on its feet as those satire programmes on HBO or radio 4 but in theatres, and with a narrative and decent actors.”

“This truly engaging, often joyous hour is a reminder that unpredictability can be a real spur for creativity. There is nothing remotely safe about this performance.” – Lyn Gardner

“A production of Aladdin.” “Belly dancing by a horse in a onesie.” “A monologue about pickled onion crisps.” These are a few of the descriptions Jess Thom’s tics have given for her show. Thom introduces us to the extraordinary world Tourettes creates around her in a piece about public space and who has access to it – in every sense of the word ‘access’.

What’s certain is that no two shows will ever be the same – having Tourettes means a neurological incapability of staying on script, and that’s where the fun starts.

The show was developed with Leftwing Idiot and puppeteer and performer, Jess Mabel Jones, or as Thom’s tics have been calling her, ‘Chopin’. Backstage in Biscuit Land premiered at the Edinburgh Fringe Festival in 2014 and received much critical acclaim.

Confirmation | ChrisThorpe
“Rachel Chavkin’s fast-moving, kinetic production offers us an absolutely compelling performance from a man who is fast becoming one of the most powerful performers in the UK.” – The Scotsman
★★★★

A show about the gulfs we can’t talk across, and about the way we choose to see only the evidence that proves we’re right.

Working with research into the phenomenon of confirmation bias, Confirmation is an attempt to have an honourable dialogue, real and imagined, with political extremism. To find out how we believe what we believe, and how we can end up so far apart.

Confirmation is a 2014 Fringe First award-winning show, written and performed by Chris Thorpe (Unlimited Theatre, Third Angel), developed with and directed by Rachel Chavkin (The TEAM).

Festival director Paul Warwick said, “I can think of no better show for encouraging people to go out the next day and cast their vote against UKIP or the many other euro-phobic/xenophobic parties that will appear on ballot papers.”

A voice for the voteless: If you’re not 18 by May the 7th you don’t get a vote and your voice won’t be heard by the politicians. So what would you have said? The Unity Theatre will bring together representatives from across the city’s youth theatres to talk about what they think is really important – further programme details to follow. The evening will include:

Ballot Box Ballad 3 from a writer under 18

Theatre maker Dan Bye (The Price of Everything, How to Occupy and Oil Rig, Story Hunt) will work with a group of young people selected from across Liverpool’s many different youth theatres to present their interpretation of what this evenings news should really be.

The day after the election, our new government hangs in the balance. Friday’s performances offer the audience the opportunity to rebuild a nation and celebrate the week of politics with some musical comedy.

“If you ever thought you’d do a better job of running the country, this is your chance.”- Lyn Gardner

The audience have the chance to take charge of a new nation through Coney’s interactive show set in the few hours after a coup in a fictional nation. Could we build a better nation? What are the rules we’re going to live by? And can we avoid the mistakes of the past?

Early Days (of a better nation) explores the possibilities of nationhood and democracy, drawing inspiration from the 2011 England riots, Arab Spring, Iceland’s crowd-sourced constitution and the rise (and fall) of Occupy.

The show previewed at King’s College London’s Arts & Humanities Festival 2014 and as part of UK Parliament Week 2014 at Oval House. It is showing at U Decide as part of its upcoming UK tour.

Rock the Vote | Johnny and The Baptists

Stars of Radio 4’s Now Show and 2014 British Comedy Award nominees, Johnny and The Baptists are bringing their acclaimed blend of songs, satire and silliness to Liverpool. With politicians now officially ranked below estate agents in the public’s trust, Rock the Vote is a desperate bid to find at least one good reason to vote. This show completes their UK tour.

All the Ballot Box Ballads together

To end it all, an incredibly uplifting show about not ending it all.

A bold new play about depression and the lengths we will go to for those we love.  Each show involves members of the audience, making each performance unique.

You’re six years old. Mum’s in hospital. Dad says she’s ‘done something stupid’. She finds it hard to be happy. So you start to make a list of everything that’s brilliant about the world. Everything that’s worth living for. You leave it on her pillow. You know she’s read it because she’s corrected your spelling. Twenty years and thousands of entries later, the list will take on a life of its own.

Produced in co-production with Paines Plough, the show was first seen at Edinburgh Fringe in 2014 and is currently performing in New York as part of a sixteen-week run.

Unity Theatre: ‘Pictures…’ an exhibition of Screen Prints& Collages by...