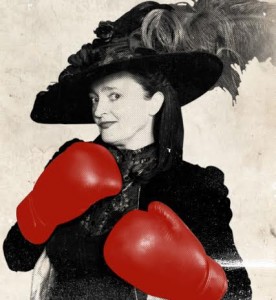 ‘Bella’ is a show with live music, song, dance, boxing, and film and tells the amazing true story of Bella Burge, a woman who, after having toured the music halls as Marie Lloyd’s dresser, entered the male-dominated world of boxing.

She succeeded in taking over the running of south London boxing venue Blackfriars Ring from her husband, the ex prize-fighter Dick Burge  – a promise made to him on his deathbed – until it was destroyed in a WWII air raid in 1940. With women’s boxing having been introduced as an Olympic sport during London 2012, ‘Bella: Queen of the Blackfriars Ring’ shows another side to women’s involvement with boxing from 100 years ago. Bella was also caught up in the notorious Liverpool Bank Fraud back at the turn of the last century, big national news at the time.