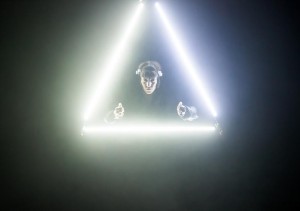 A wordless sci-fi thriller performed in darkness and accompanied by a pulsating soundtrack, an Edinburgh Fringe sell-out show from the consistently inventive Theatre Ad Infinitum, directed and written by George Mann.

Following sell-out shows at the 2014 Edinburgh Fringe Light embarks on a UK tour, beginning with performances at the Barbican as part of the London International Mime Festival. Inspired by Edward Snowden’s revelations, Theatre Ad Infinitum conjures an Orwellian future where a totalitarian regime monitors the thoughts of its citizens through implants.

Charged with hunting down ‘terrorists’ who seek illegal disconnection, a young government agent encounters an enigmatic figure from his shadowy past. This nightmarish tale of love, betrayal and technological power blends anime-style storytelling and a pulsating soundscape by composer Chris Bartholomew to draw audiences into a sci-fi realm, entirely illuminated by LED strip and torchlight. 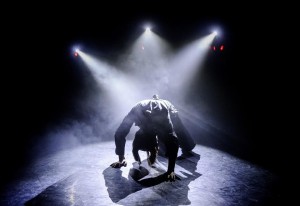 Created by the company behind Translunar Paradise and Ballad of the Burning Star, which both toured extensively to critical acclaim, Light is yet another original production from a company whose work shifts in style as they explore each new subject. Director George Mann was recently announced as the recipient of a 2015 Quercus Award, conceived by the National Theatre Studio to enable promising directors to make the transition from directing in fringe and smaller venues to working on main stages around the UK. Starting in 2015, George will work with Tom Morris as Associate Director at Bristol Old Vic, while continuing as Co-Artistic Director of Theatre Ad Infinitum alongside Nir Paldi.

Unity Theatre: In A Quiet Space