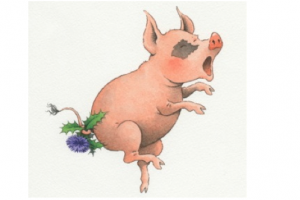 Jonathan Langley returns to Liverpool with an exhibition of children’s book illustrations including artwork from his million-selling collection of nursery rhymes and tales published by HarperCollins. This show will also feature artwork for books written by Michael Rosen including the hugely popular, award-winning Snore! and its two sequels. Other original artworks included in this exhibition are illustrations for Rudyard Kipling’s Just So Storiesand Good Baby, Bad Baby written by Nanette Newman.

Jonathan Langley was born in Lancaster in 1952 and studied at Lancaster College of Art before completing a degree course at Liverpool College of Art in 1974 and an MA Hons at Central School of Art and Camberwell School of Art. He has worked in publishing, editorial, advertising, film, giftware and packaging for 40 years and has won many awards for illustration as well as paper engineering. As an illustrator and writer Jonathan has dozens of titles to his name and his books are published throughout the world.

This selling exhibition is designed to tie in with the Unity Theatre production of Rumpelstiltskin and includes original artwork from Jonathan Langley’s own retelling of this popular story.

Signed copies of his books will also be available for sale.