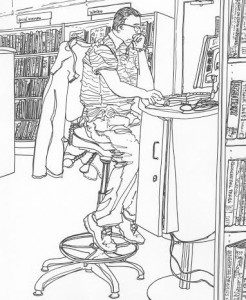 Liverpool artist, Jane Hughes presents a solo show at Unity Theatre. The pen and paper works are from her ongoing documentary drawing project based in local libraries.

The exhibition takes place over floors one & two including the bar areas.

An exhibition of work from the artist’s ongoing documentary drawing project in threatened Liverpool libraries.

Local libraries provide a unique learning space for all: a warm and friendly place for people to browse, read, work online or maybe take part in more organised activities such as local history groups, book clubs and so on. However, these sanctuaries are threatened by further government cuts to funding, many have already been closed and most that remain are now on reduced opening hours. This situation can only get worse with further savage cuts to come.

Jane’s drawings are made in situ and seek to capture and record the everyday life and activities in local libraries before these places disappear forever.

‘In a quiet space’ is one of several documentary projects carried out by Jane over the past few years. She is influenced to a degree by the Mass Observation project that began in the nineteen-thirties. Her subject matter is of the everyday, with all drawings completed straight off in pen at each location. Jane’s documentary work has been widely viewed with recent solo exhibitions in Colchester and Derry/Londonderry, and more locally at the University of Liverpool (School of Histories, Languages & Cultures). Her work has also been selected to tour in International juried drawing shows in Australia, the Czech Republic, Hungary and Slovakia.