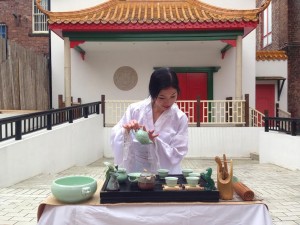 A taste of life in old Peking is being dished up at a music and dance feast at the Unity Theatre, as Liverpool’s award-winning arts and culture company, China Pearl will present a Traditional Han Chinese Show.

The show will feature the sophisticated, elegant and beautiful traditional Han culture, the quintessential ethnic group for Chinese diaspora, with an eclectic and enticing programme of dance and music. There will be martial arts, Tai Chi, a tea ceremony, traditional costume catwalk, calligraphy and poetry.

It will be an opportunity to learn more about Chinese culture, history, arts and literature.

The Chinese tea ceremony is also called Chinese arts of tea with a history going back thousands of years in China. It is a Chinese cultural activity involving the ceremonial performance of preparation and brewing the tea.

China Pearl will also be performing three pieces of traditional Chinese Han Tang dance; the ancient dance “Xiang He Ge” based on an ancient Chinese poem “Your Collar” from Shi Jing, the very first collection of ancient Chinese poetry from 3000 years ago, and two new pieces, one based on another famous ancient poem from Shi Jing “Tao Yao” (Peach Blossoms), and the other one about females in the last dynasty of China, the Qing dynasty, whose deportment and movements were influenced the social etiquette and practice for women in Imperial China, like elegant and conversative manner and footbinding.

This will be the first show in the UK themed on traditional Han Chinese culture. Han Chinese is the main group in China with very long history and rich culture.

Find out more and book tickets at www.china-pearl.co.uk