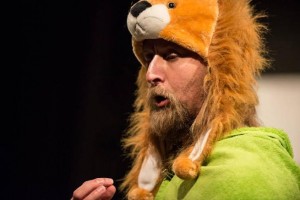 When John Lennon fell in love with Yoko Ono the world was shocked. When John and Yoko claimed that their love was politics and art, the world squirmed. When Lennon was assassinated the world mourned.

Following the success of last year’s Beating McEnroe, Jamie Wood returns to Liverpool with a first draft of his new show.

Playing amongst the enigmatic instructions of Yoko Ono’s art works, in the shadow of Lennon’s death, O No! is a psychedelic ride, a wonky homage to the woman damned for destroying the Beatles. A show about reckless optimism, high art and what we might yet have to learn from the hippies.

‘Beating McEnroe is as funny as the best comedy, super-theatrical & entirely unlike anything else’ – Brian Logan (Comedy Critic- The Guardian)