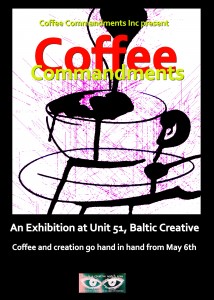 “Coffee and creativity go hand in hand” is the motto by which Coffee Commandments Inc. live their life.

With an ever developing collection of stunning fine art images to their names, they will soon be showing a selection of work at the very
fine venue of Unit 51, an excellent cafe in an immaculately converted former factory building in Liverpool\’s up and coming creative quarter the Baltic Triangle.

This follows a group show as part of the Coffee Art Project at London’s Old Truman Brewery which saw the work shown in the capital
for the first time. The duo’s work celebrates cafe culture with a series of they jointly refer to as commandments. The series melds the
classical forms of pencil and ink strokes and the modern art of digital manipulation to produce fine art images that are truly unique.

The idea for the series began over a semi-serious conversation about the Ten Commandments of coffee in a small cafe on the back streets of Liverpool and soon the art was flowing producing more than the traditional Ten Commandments could handle.

The initial set of commandments first appeared as part of Seba Rashii Culture Zine’s Coffee Culture week in 2012 to much acclaim and  soon had their own following on social media. Future plans for the duo include further exhibitions, a state of the art website and at least two coffees a day.

Anna Di Scala is a self taught artist whose oil paintings and sketches are renowned for their beauty and clarity. Her work features beautiful real women in portrait form but her nudes are the pieces for which she is known best. They have bewitched many audiences at shows and continue to hold a fascination beyond the obvious exterior nudity, their personalities showing through clearly.

Seba Gahan is better known as the Creative Director of Liverpool based Seba Rashii Culture Zine but his talents stretch beyond the pages of the magazine. Much of the imagery and promotional material for the ‘Zine is designed by Seba himself and his photographic work has been seen at venues such as The Bluecoat, FACT and Threshold Festival. He is open to all proposals that may come his way when it comes to art and photography.

Seba originated many of the initial quotations used in the Coffee Commandments series and provided the digital and otherwise  treatments to Di Scala’s original ink drawings. This has created a striking mix of the traditional and the modern and has been well received by all who have seen the work.