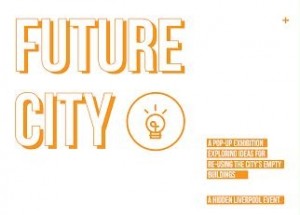 Hidden Liverpool – an exciting yearlong project from PLACED that unlocks memories behind Liverpool’s empty buildings to create a vision for its future.

The project focuses on some of the fantastic buildings that have played a part in the history of the city but are currently lying empty. The aim of the project is to provide an accessible way for everyone to share and learn about what lies behind Liverpool’s closed doors, revealing the city’s history in a new and exciting way.

With our exciting yearlong project as part of PLACED coming to a close in August, Future City aims to bring together design proposals from 11 Merseyside schools having worked with architects from the Placed team on ideas for clients such as Leaf and FACT on re-using the city’s empty buildings such as the Welsh Presbyterian Church, India Buildings and Toxteth Reservoir.. Our pop-up exhibition at the Albert Dock features a fascinating and diverse mix of design proposals from Year 12 and 13 students from Merseyside schools, as well as design proposals developed by Liverpool John Moores University architecture students working to the same brief, offering another perspective.

There’s also an opportunity to see the first images from the new ‘Secret Cities – Liverpool’ project, showcasing photographer Andrew Brooks stunning images that link to our theme of Hidden Liverpool.

The exhibition is set to challenge current plans and hopes to add to a vision for the future of the city of Liverpool and the built environment in which we live. Our previous events have focused upon public debates, walking tours and other exhibitions such as the ‘People’s History’ using a ‘memory bank’ to collect stories about so many forgotten and ‘hidden’ places. The exhibition will bring with it the chance to explore our thoughts and act as a basis for public discussion on how we can re-use the buildings of ‘Hidden Liverpool’. We invite all interested to contribute their thoughts and ideas to the growing debate. We hope the exhibition to be the start of conversation relating to ideas for re-using Liverpool’s empty and underused public buildings.

Future City will take place at Unit C7, The Colonnades, Albert Dock (same side as Tate Gallery). Hidden Liverpool is devised and managed by Placed and funded by the Heritage Lottery Fund.