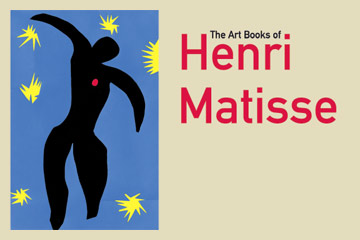 The Walker Art Gallery is proud to present an exhibition of art books by one of the greatest artists of the 20th century, Henri Matisse (1869-1954).

These works are part of Bank of America Merrill Lynch’s extensive art collection, and have been loaned to the Gallery through the company’s Art in our Communities® programme as part of a commitment to share its artworks with the wider public.

The exhibition comprises 63 framed original illustrations with text from four of Matisse’s most significant books, including his famous Jazz (1947), one of the most celebrated artists’ books in the history of modern art.

In addition to the core group of Matisse works, a number of artists’ books from the Walker Art Gallery’s permanent collection will also be on view, by artists such as Ed Ruscha, Derek Boshier, Gilbert & George, Tom Phillips and Jeff Nuttall.

Best known for his boldly coloured paintings, Matisse created a body of work that also included drawings, prints, cut-outs and sculpture, as well as costume and stage set designs. He began painting at the age of 20 when his mother bought him art supplies during a period of convalescence following an attack of appendicitis. He did not begin his work with illustrated books until his late sixties, but the same flowing lines that characterised his oils and pencil studies carried over to the printmaking medium. Out of his vast body of work it was his illustrations that Matisse was most proud of and he used ever more imaginative means to create them, such as paper cut-out, a technique he invented. In 1954, at the age of 84, Matisse died but it is reported that he had continued creating paper cut-out works until the day of his death.

Acting Director of Art Galleries Sandra Penketh says: “We are very grateful to Bank of America Merrill Lynch for lending this exhibition to the Walker Art Gallery. It is both an important and beautiful collection and we are delighted to show it. We are also pleased to have this opportunity to exhibit our own rarely-displayed yet fascinating collection of art books alongside those of Henri Matisse.”

Bank of America’s European credit card arm, Bank of America Europe Card Services, is based in Chester in the North West of England.

Ian O’Doherty, the company’s Europe Card Executive, says: “We are delighted to make Matisse’s illustrated books available to the Walker Art Gallery’s visitors. Our company proudly supports the arts through the provision of grants and sponsorship. We also loan our art collection to museums and non-profit galleries at no cost so they can generate vital revenue, which contributes to the growth of local economies. We’re especially pleased to be working with the Walker Art Gallery as it is an acclaimed institution and such a short distance from our Chester headquarters.”

Rena De Sisto, Global Arts and Culture executive at Bank of America Merrill Lynch adds: “We are thrilled this exhibition will have its first UK display in Liverpool. At Bank of America Merrill Lynch, we strive to give people around the world access to great art and through our Art in Our Communities®  programme we have lent over 40 exhibitions to museums and galleries around the world. Institutions such as the Walker are an intrinsic part – both economically and culturally – of the communities they serve, and their role in creating a more culturally aware society cannot be overstated.”

Jazz (1947): Matisse’s most famous book is one of the most celebrated artists’ books in the history of modern art.  It features one of the artist’s most widely reproduced images – the iconic illustration of Icarus as a languid black figure with a red circle at his heart, plunging downwards against a royal blue night sky, surrounded by yellow stars. Jazz was conceived as a sequence of stencil prints inspired by Matisse’s cut-out forms and based on his exploration of colour and shape. He paired the images with his musings on life and art. The appearance of Jazz in portfolio format, as opposed to a bound book, allowed it to be displayed on walls rather than stored in cases or on bookshelves. This not only contributed to its desirability as a collectable item but increased its exposure. It left a lasting impression on Matisse’s contemporaries and on future generations of artists who also created books as unique works of art.

Poèmes de Charles d’Orléans (1950): In 1941, whilst bed-bound in occupied France, Matisse had the idea of illustrating the work of the medieval poet Charles d’Orléans (1394-1465), whose poems he greatly admired. He dedicated enormous time and energy to this book, which took him three years to complete. The finished volume comprises 54 full-page colour lithographs accompanied by a selection of d’Orléans’ poems written in Matisse’s own rolling script. Most appropriately for this 15th-century text, Matisse painstakingly copied his favourite verses by hand in the manner of medieval scribes illuminating a manuscript.

Poésies de Stéphane Mallarmé (1932): Matisse was in Tahiti when the Swiss publisher Albert Skira asked him to create etchings for the French Symbolist poet Mallarmé’s Poésies. He worked feverishly on the project for a year and a half, gravitating towards poems based on women and nature rather than the more obscure verses. He made an enormous number of drawings, 27 of which were selected to be reproduced as etchings for the final publication. This work is significant because it was Matisse’s first illustrated book and because the style of the etchings was related to the style of the paintings he was working on at the time.

Pasiphaé, Chant de Minos (Les Crétois) (1944): The French author Henry de Montherlant (1896-1972) suggested that he and Matisse should work on a project together. Matisse loved the idea and proposed to illustrate Montherlant’s contemporary retelling of the Greek myth. This fable tells the story of King Minos of Crete, who was cursed by the sea god Poseidon for refusing to sacrifice his most handsome animal, a white bull. Poseidon consequently punished Minos by placing a spell on his wife, Pasiphaé, who fell in love with the animal and gave birth to a bull-headed man, the Minotaur. Matisse saw a lot of potential in this passionate tale and sought to match its heightened emotion by creating stark black-and-white linoleum cuts, interspersed only by the briefest of red capital letters to mark the beginning of each passage. The resulting 18 illustrations, composed of smooth, superbly controlled lines, complement the elegant classicism of this myth and recall Greek vase painting.

To accompany The Art Books of Henri Matisse the exhibition will also explore the artistic genre of artists’ books through those in the Walker Art Gallery’s own collection. A special display will include works by Gilbert & George and Tom Phillips, which have rarely been seen in public.  The artists and work featured include:

Six books by Ed Ruscha (born 1927) that capture the character of Los Angeles in Ruscha’s eyes, and his ideas about popular culture at that time. The books have a humorous edge, with their deadpan images and almost useless information.

16 Situations by British artist Derek Boshier (born 1937). Boshier is a painter, sculptor and printmaker. During the 1970s he experimented with different media, including books. Using found photographs and inserting geometric forms within them, his book 16 Situations is an enquiry into sculpture and its role in society.

The Case of Isabel and the Bleeding Foetus and Oscar Christ and the Immaculate Conception by Lancashire-born Jeff Nuttall (1933 – 2004). Both these works reflect Nuttall’s belief that art contained both truth and beauty.

Dark Shadow by Gilbert & George (born 1943 & 1942). Gilbert & George describe themselves as “living sculptures”. This book records thoughts and encounters in the artists’ lives, playing with the relationship between text and image.

A Humument by Tom Phillips (born 1937) will also go on display. The book is one of Phillips’ best known works. Using the book A Human Document by Victorian author William Hurrell Mallock, Phillips painted, collaged and drew over the pages, leaving some of the text visible to create a new story. First published in 1970, the Walker’s 1980 version was the first to be commercially produced.

Modern artists’ books did not become a fully developed art form until the late 20th century, coming to prominence in the radical years of the 1960s and 1970s. The Walker Art Gallery acquired a group of books at this point to reflect their growing popularity as an independent art form.

Artists could self-publish such books cheaply, making them a perfect platform to distribute ideas and bypass the traditional gallery system.  Artists still use them as a way to experiment and explore ideas. Such artworks are purposely designed for the book form. The artist thinks about the book as a whole, the experience of reading or viewing it and how the design and format reflect its contents.

Walker Art Gallery: Only in England: Photographs by Tony Ray-Jones and...

The Walker: Rankin: ALIVE: In the Face of Death