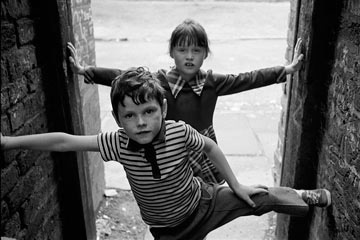 A moving exhibition featuring 60 photographs of children playing on the streets of 1970s Liverpool.

Paul Trevor came to the city in 1975 initially as part of a project called “Survival Programmes” which documented inner city deprivation. The young photographer spent several months recording family life across Liverpool on the fringes of the city centre.

Among the terraced streets and high rise flats, Paul captured vibrant images which portrayed a community defiant and in high spirits despite a backdrop of unemployment and poverty.

He said: “The time I spent in Liverpool in 1975 was special for me. My street photography was a spontaneous approach to capturing life as it was lived.

“Despite initially worrying whether I would be accepted into the community, people were very friendly and happy to be photographed.  Britain’s inner cities were difficult places to live in during that era. Opportunities to progress in life were limited. There simply were not the jobs for people. Life was hard.

“But it was not all doom and gloom. I found people who were good humoured, cheerful and full of energy.”

Like you’ve never been away forms part of Look11 – Liverpool International Photography Festival. Launched in May, this is the first photography festival to be held in the city.

Annie Lord, National Museums Liverpool, head of Museum Exhibitions, said: “Paul Trevor’s work in Liverpool in the 1970s was remarkable. The black and white images give us a real glimpse of family life in the city during that era.

“We are absolutely thrilled about exhibiting Paul’s images at the Walker Art Gallery. This will be an extremely warm and moving exhibition about childhood, life and Liverpool.”

Paul Trevor re-visited the Everton and Granby areas of Liverpool last summer (August 2010) in a bid to track down some of the youngsters he photographed nearly four decades earlier.

As he was leaving the Everton Community Centre a resident recognised him immediately and said: “Paul, it’s like you’ve never been away” – which has inspired the title of the exhibition.

Paul has been successful in contacting many of the faces in the photographs. The children are now in their 40s with families of their own. Unfortunately he has found some sad stories too. A youngster who features on the lead image for the exhibition, died in his 20s through an overdose.

Paul said: “I was really sad to hear that this particular youngster had died young. I was looking forward to hearing about what he was doing with this life now.”

In the long term Paul wants to make new pictures of the people who appeared in his photographs and hear from them about their lives since they last met.

He added:  “The image freezes the moment but life goes on. And I’m keen to make fresh photographs of those kids as adults wherever they are today.”

More details about Like you’ve never been away: photographs by Paul Trevor can be found at: http://www.liverpoolmuseums.org.uk/paultrevor/

Walker Art Gallery: Only in England: Photographs by Tony Ray-Jones and...

The Walker: Art as Autobiography: The early work of David Hockney