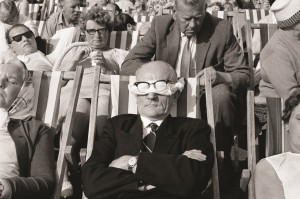 A new exhibition explores the lasting influence of the photographer Tony Ray-Jones on the development of British photography. More than 100 images, around half of which are new prints selected by esteemed photographer Martin Parr, are humorous yet melancholic photographs, taken between 1966 and 1969. As a body of work they beautifully reflect English customs and identity, as well as Ray-Jones’ innovative approach.

Also included are around 50 of Parr’s own rarely seen early black and white photographs from The Non-Conformist series which reveal how an early introduction to Ray-Jones’ work affected Parr’s emerging style.

“Don’t take boring pictures” was a self-imposed rule Tony Ray-Jones lived by throughout his all too short career. Documenting ordinary English life, his images were a startling departure from anything else being produced at the time. They quickly attracted the attention of the Institute of Contemporary Arts (ICA), London, where they were exhibited in 1969. Tragically, in 1972, Ray-Jones died from leukaemia aged just 30.

Intriguing ephemera – notebooks, layouts and lists – from the Ray-Jones’ archive are included in the exhibition and give viewers a touching insight into his dedication. In 1970, Martin Parr, a photography student at Manchester Polytechnic, was introduced to Ray-Jones. Struck by the ground-breaking images, Parr went on to produce The Non-Conformists, shot in black and white in Hebden Bridge and the surrounding Calder Valley. The title for the project came from the Methodist and Baptist churches that dotted the region and defined a communal character.

It is clear to see within these quietly observational images of various aspects of traditional life, the legacy of Ray-Jones.

When describing his first encounter with Ray-Jones’ work Martin Parr said: “It was his ability to construct complex images, with everyone perfectly placed in the uniquely English atmosphere and surroundings, which struck a cord of recognition – and envy – in me.”

The exhibition forms part of the LOOK/15: Liverpool International Photography Festival which launches on Saturday 17 May 2015 and will see dozens of photographic exhibitions and events taking place across the city.

Walker Art Gallery :The Living and the Dead, John Kirby