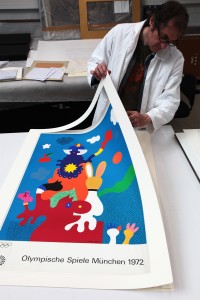 The striking 18 lithographic prints, all from the Walker’s own collection, feature the work of world-famous artists including David Hockney, Allen Jones, Oskar Kokoshka, Ron Kitaj and Eduardo Chillida.

The 1972 Munich Olympics aimed to promote a positive image of both international sporting activity and the modern German nation. The official motto of the event was ‘The Happy Games’, but this ideal was tragically overshadowed by the murder of 11 members of the Israeli team by members of the Palestinian group ‘Black September’.

The Munich 1972 posters were the first of their type, commissioned as part of an effort in ‘relating artistic activity to the Olympic Games’. Since 1972 artists’ posters have become a key part of Olympic celebrations, often revealing the links between sport, art, politics, commerce and culture.

The 1972 artists, selected by the organising committee, represented both established and progressive trends of the early ‘70s. Artists were free to choose their themes, but encouraged to incorporate a relationship with the Olympic ideal.

Walker – The Rise of Women Artists

THE EAVESDROPPER Artist intervention at the Walker Art Gallery