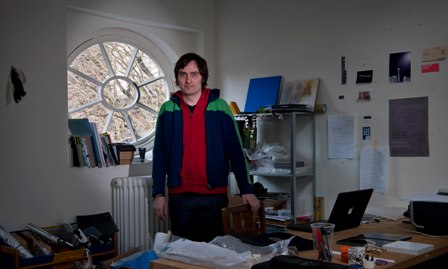 Elements & Satellites, a display of recent work by 2011 Liverpool Art Prize winner Markus Soukup, opens at the Walker Art Gallery from 24 March to 15 July 2012 and includes a new piece made especially for the gallery.  Zwischen-Verbindung, an animation project which uses a variety of techniques and incorporates a sculpture set in a virtual space, is a response to the Walker Art Gallery’s collection of Italian Renaissance paintings.

The animation acts as a bridge, linking the technology of the past with that of the present; exploring the way advances made during the Renaissance period have made our life in the 21st Century what it is today. The title of the piece, taken from the German zwischen (between) and Verbindung (connection) refers to the idea of ‘interconnectivity’, a notion that all things are related and cannot be understood in isolation.

The display includes two other interesting pieces. Un Space (2011) is a video project inspired by a walk on the tidal mud flats of Southend. The work focuses on this ‘in between’ place and its constant state of change. The narrative of the main video describes the effects of the tide filmed during observations on the Thames Estuary, while a second monitor shows an animation on the relationship between tidal and lunar movement.

The final piece is a sequence of experimental light drawings that are a playful look at motion and perception.

As the winner of the Liverpool Art Prize 2011, the opportunity to display work in the Walker Art Gallery was awarded to Markus as part of his first prize.

Dr Laura MacCulloch, curator of British Art says: “We are delighted to be showing the work of Markus Soukup, winner of the Liverpool Art Prize. We often seek ways to reinterpret our collection and Markus’ new piece does just that, shedding new light on older paintings. Markus’ work reflects his interest in language, space and the imagination and investigates the tension between our thirst for new technology and its impact on society.”

Markus says: “It is amazing to be exhibiting at the Walker Art Gallery. My interest in various phenomena has inspired three different pieces. I hope the selection will act as a bridge between times and passes on some of that fascination.”

World Museum planetarium- For visitors inspired by the themes in Markus’ work a new show, Chronicle of a Journey to Earth at World Museum’s planetarium (also on William Brown Street) follows an intergalactic traveller exploring the galaxy examining planets, comets and asteroids along the way.

The planetarium has recently undergone a major re-vamp, more than forty years after it first opened in 1970. Working in partnership with German-based company Zeiss, a new digital projection system has transformed the planetarium experience so visitors can become even more immersed in a show which brings the solar system right to their seat. www.liverpoolmuseums.org.uk/wml