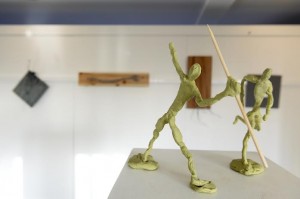 An exhibition of work by 14-year old sculptor Cian Radcliffe is currently on display at the Vitreum Gallery at Merchant Taylors’ Girls’ School.

Cian is home schooled by his parents and it the Director of Art at Merchant Taylor’sl, Mick Gill, saw and chose Cian’s art for the next exhibition

The artwork is made from various materials including ceramic, mod roc, wire and recyclables.

Born in London but raised in Liverpool, the young artist has been fascinated with figures and movement for as long as he can remember. This fascination culminated in a compulsion to reproduce the human figure through art; his father Paul says he would bring home small figures made from the tinfoil in his lunchbox, or anything else he could lay his hands on, usually blue tac, paper clips or plasticine.

In 2007 Cian made a series of model babies inside sea shells which were sold in a school fundraiser. Later, in 2009, a selection of pieces were displayed in The Vitreum as part of an exhibition of school pupils’ work.

More recently, Cian has been working in ceramics and pottery, and met his friend and mentor Mike Badger who has been helping to develop his draughtsmanship and painting technique. Around this time Cian began to create larger pieces using wood and wire.

Cian said, ‘I feel so proud to have my work displayed in The Vitreum – I never thought it would get this far or that I’d have enough for an exhibition. Sculpting is a compulsion for me; if I don’t do it I start to feel depressed! I’d like to make art a full-time career when I’m older.’ 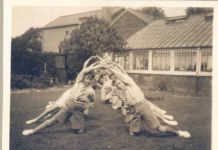 The Vitreum – A State of Change: Susan Meyerhoff Sharples