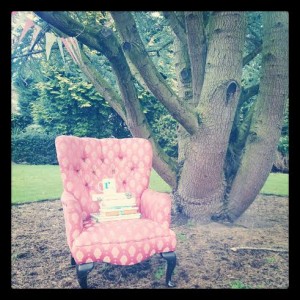 Times and full listings (see below)

The Reader Organisation at Calderstones Mansion will play host to Liverpool’s biggest children’s literature festival The Secret Garden of Stories from the 28 to the 30 of August; with a variety of literary events, talks by leading authors in the field, storybook performances as well as games and competitions. Over the three days, festival goers will be treated to quality child friendly stories, art and theatre surrounded by beautifully imaginative designs bringing books to life, created by a group of young volunteers aged 14 – 16.

The ‘Author Den’ will see some well-loved children’s authors including; Andy Mulligan author of The Ribblestrop Trilogy and Trash the latter of which is due to be released as a feature film this autumn directed by Stephen Daldry featuring Martin Sheen and Rooney Mara, Cathy Cassidy whose books include hits from The Chocolate Box Series; Marshmallow Sky and Cherry Crush, Lydia Monks, one of the best-loved illustrators of her generation, illustrator of the phenomenally successful What The Ladybird Heard with Julia Donaldson. Finally Jon Mayhew will share excerpts from his debut novelMortlock shortlisted for the 2011 Waterstones’ Children’s Book Prize alongside some of his latest work. There will also be the opportunity to join Laura-Kate Chapman illustrator of The Kite Princessfor a kite making workshop with a difference.

The Mansion Garden will be transformed into a hive of bookish activity with a fairy-tale forest, book nooks, heritage crafts and shared-reading sessions whilst performances of Roald Dahl’s Dirty Beasts and Revolting Rhymes entertain children and adults alike. There will also be a special performance by the Bookworm Players of The Secret Garden held in Calderstones very own secret garden.

Families will be encouraged to join the ‘Pets Challenge’ as team cat or team dog (fancy dress optional) and complete a series of games and obstacles to decide who will reign victorious at the end of the day and win some literary treats including a signed first edition of David WalliamsDemon Dentist or signed copies of Terry Deary’s Horrible Histories: Angry Aztecs or Woeful Second World War alongside many more.

Calderstones Park – Birds in the Park by Joel Bird