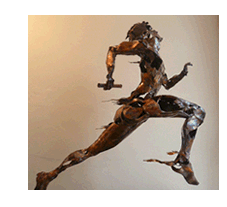 This is a collection of new work created by Tony Evans for “Twenty Twelve” featuring copper and bronze sculptures of Olympians alongside his animal pieces.

The subjects are depicted in that moment in time that portrays the supreme effort, grace and movement of both animals and humans alike.

The Gallery Liverpool – Exhibition by The Sefton Guild of Artists

The Gallery Liverpool: REALISM: An Exhibition