Liverpool has a long tradition of artists who use abstract expressionism in their work.

Abstract expressionism was a post-World War II art movement achieving worldwide influence. Action Painting as was popular in the late 1940’s – late 1950’s. The energy, action and motion of the process of painting uses the psyche of the painter to express that which is conveyed on the canvas. Colour Field and Hard-Edge Painting following the action painting of the 1940’s and 1950s was another stream of Abstract. The Colour Field works consist of large coloured areas.

The expression Hard Edge appeared in the late 1950’s to describe geometric abstract works. By the 1960s, the movement had lost most of its impact, and was no longer so influential. Movements, which were direct responses to, and rebellions against, abstract expressionism had begun, such as pop art and minimalism.

However, many painters who had produced abstract expressionist work continued to work in that style for many years afterwards and still do – as do many others. 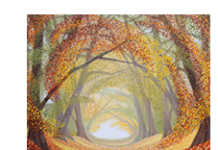 The Gallery: Art from The Square

Gallery at Clayton Square – ‘Mad About The Beatles 2’

The Gallery Clayton Sq: ‘The House That Hope Built’

The Gallery Clayton Sq: ‘From the Abstract’

The Gallery Clayton Sq: ‘From the Abstract’