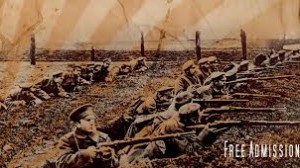 Discover the stories of local lads who gave their lives to the War as well as artefacts that have never been shown to the public until now – all of which are genuine, dug straight from the battlefields in France and Belgium.

The exhibition features hand grenades, death plaques, gas attack rattles, bullets, soldiers’ boots, ‘trench art’, and much, much more. Also donated by members of the public are medals, and letters – even a letter signed by Winston Churchill. There will also be many personal stories of the war years to discover, put in context by text, images sights and sounds.

The Florence Institute War Memorial Plaque, which adorns the staircase and has done for many years, lists the Florence Institute members in memory of local men who had fallen in the Great War. A special feature in the exhibition will tell the stories of six men who feature on this plaque that were members of The Liverpool Kings Regiment. The book “For Their Country” which lists all of the names that appear on the plaque is available for sale throughout the exhibition.

The exhibition involves a collection of community-focused organisations including local schools, Liverpool Kings Regiment, RAF, as well as local businesses.

A grant from the Heritage Lottery Fund (HLF) which enabled the Florence Institute to put on this memorable exhibition and also run a number of events alongside the exhibition to mark the Centenary.

The Florence Institute’s commemoration of the First World War begins on 9 August with an indoor street party, 1-2.30pm, and later in the year a talk by Liverpool Pals (date TBC).

The Florrie: The Saturday before Christmas Handmade Arts & Crafts Market

The Florrie: Your Past Their Future