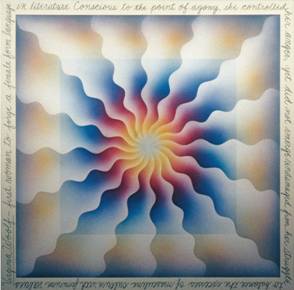 Artist, writer and activist Judy Chicago, whose work set the agenda for women’s art over the past five decades, launches her new book and exhibits in Liverpool this November. Her Liverpool visit on 8 November is the only city she will visit outside London on this UK trip.

Voices from The Song of Songs, a series of six paired prints with accompanying documentation, will be exhibited in the city’s The Black-E Gallery until 31 January. The series was based upon Marcia Falk’s translation of Biblical love songs and explores mutuality of desire and a shared enjoyment of sexual pleasure. The exhibition, which is already open to the public, will be officially opened by Judy on 8 November. In addition, an illustrated monograph published by The Black-E will be launched. Women, Art, and Society: A Tribute to Virginia Woolf by Judy Chicago was originally delivered as a lecture in 1982 on the 100th Anniversary year of Virginia Woolf’s birth and this publication marks the thirtieth anniversary of this important lecture.

A pioneering force who came to prominence in the late 1960’s and early 1970’s, Judy helped re-shape the male-dominated art landscape by creating innovative work from a woman’s perspective – reacting to social and political injustice during revolutionary times.

Her art and her ideas continue to exert a palpable influence on generations of women artists who came after. In 2011 her contribution was recognised and in some ways rediscovered during Pacific Standard Time, the California-wide celebration of the history of the L.A. Art Scene which saw sixty cultural institutions collaborate in one six-month long initiative (http://www.pacificstandardtime.org/) and featured work across various media by Judy Chicago. The artist is widely represented in museums and public collections worldwide.

As well as her Liverpool exhibition and book launch, November 2012 sees Chicago exhibiting in London for the first time since 1985. Riflemaker will show paintings and sculpture from as early as 1963, a decade before the artist co-founded the influential feminist art programmes at California State University, Fresno, and CalArts which led to Womanhouse, the world’s first large-scale public feminist art installation.

The artist recently gifted two Birth Project works to the Birth Rites Collection at the Midwifery school at Salford University, the only collection of contemporary artwork dedicated to the subject of childbirth. These needlework pieces are typical of Chicago’s decision to appropriate the ‘feminine arts’ – embroidery, needlework, quilting – and use them in an atypical way, or combine them with ‘masculine’ skills such as welding and woodwork. It is this combination of media and subject matter that gives Chicago a unique voice in the cannon of contemporary art.

November 8: Official opening of The Voices from The Song of Songs, a series of six paired prints with accompanying documentation, plus the publication of Women, Art, and Society: A Tribute to Virginia Woolf by Judy Chicago – originally delivered as an illustrated lecture in 1982. See attached invitation – please note RSVP essential.

Copies of Women, Art, and Society: A Tribute to Virginia Woolf by Judy Chicago are available for review. Please contact Jenny Morgan (details below) if you wish to receive a review copy.

The Voices from The Song of Songs

One of the pioneers of Feminist art in the 1970’s and a major figure in contemporary art, Judy Chicago articulated her feminist vision not only as an artist, but also as an author and educator, most notably founding the Feminist Art Program at California State University, Fresno, as well as facilitating the first major feminist installation and performance space, Womanhouse.