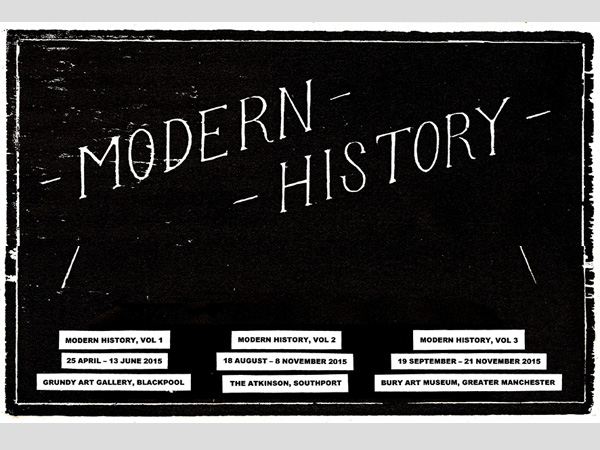 Modern History Vol. II is a group exhibition, guest curated by internationally respected curator Lynda Morris, who has selected new commissions and existing works by national and international contemporary artists based in the North West. By taking the theme of ‘Modern History’, the exhibition offers perspectives on cultural, social, and political change, from artists across different generations, with works reflecting on local and global issues, largely post-1969 to the present day.

The second exhibition in the series, Vol. II focuses on the body politic, landscape and urban space (from the regional to international, the personal to the political), with works presented in a range of media including ceramics, film, painting, photography, and sculpture. Previously, Modern History Vol. I explored subjects of cinema, global communications and surveillance, football and leisure, while Vol. III will address national and international, social and political issues post-1969, and features archival material, design and text-based works, alongside animation and film, crafts, drawing, painting, photography, and sculpture. While not definitive in its survey of contemporary art in the North West right now, it aims to present a microcosm of certain dialogues currently occurring in the region, articulating how these are intertwined with the world today and its pressure points.

There are two guiding strands at the heart of this series of exhibitions: the first is that artists – i.e. those, as Morris describes, with a strong moral core – have an acute ability to reveal and bring to focus the underlying forces at work behind a given historical moment. An artist’s sensibility and the visual tools at their disposal enables them to display insight in a way that is in relief to the noise that we hear in our everyday life through advertising, mainstream media and in the voices of authority that are usually the loudest in societies across the world. The second guiding principle behind Modern History Vols. I-III is that history is easily forgotten, and efforts should made to remember it, and in particular the complexity that lies behind points of tension and division.

Art Gene’s (Maddi Nicholson and Stuart Bastik) new work Islands of Barrow ‘maps’ a history of Barrow-in-Furness mining (personal and collective) stories and histories of those local to the area. Presented in the form of a new coastal map for the borough, they illustrate a rich diversity through points of interest including Hidden Assets, Natural Wonders, Historical Sites, and Industrial Heritage. The guide introduces the birth of Barrow during the Industrial Revolution iron production, and subsequent ship, airship and nuclear submarine building on the islands, alongside the present day nationally important Nature Reserves, and the largest offshore wind farm in the world off Walney Island.

In juxtaposition is Nina Chua’s film documenting a journey around the city of Chongqing (2011), a modern port city in southwest China. It is a stark contrast to the open and flat, rural space of Barrow, presenting a sprawling metropolis, a city in constant development and upward growth. John Davies charts this urban growth, or ‘regeneration’, closer to home, documenting many of the citywide building projects that began around the time of the new millennium. The photographs exhibited here show the changing, and expanding, cityscapes of Newcastle (Swan House and Westgate), Birmingham (Centenary Square and New Street Station), and Hammersmith Flyover, London, from 2000 to 2001.

Margaret Harrison presents a set of photographs from Women and Work: A Document on the Division of Labour in Industry (1973-75). Women and Work (created by Harrison, with Kay Hunt and Mary Kelly) was an investigation timed to coincide with the implementation of the Equal Pay Act (EPA), passed in 1970. The project told the stories of over 150 working women, and offers a specific account of the participants’ relationship to the workplace, as well as a more general examination of the changes in labour and industry brought about by the EPA. It also points to the more general inter-mingling of art, politics, union activism and feminism that took place in Britain in the early 1970s. Artists such as Hans Haacke, Stephen Willats and Conrad Atkinson (who will exhibit work as part of Modern History Vol. III, at Bury Art Museum & Sculpture Centre) were early proponents of a politicised form of Conceptual art that emerged around this time in Britain and in America, but Women and Work was one of the earliest projects to tackle political and industrial issues from an overtly feminist perspective, a radical move at the time.

A selection of ceramics from Lubaina Himid’s The Lancaster Dinner Service (2007), demonstrate an intervention, a mapping and an excavation. The work is a fragile monument to an invisible engine working for nothing in a greedy machine. It remembers slave servants, sugary food, mahogany furniture, greedy families, tobacco and cotton fabrics but then mixes them with British wild flowers, elegant architecture and African patterns. Painting over patterned plates, jugs and tureens, mostly old and used, from the shops and markets of Lancaster, Preston and Whitehaven, Himid has painted pages from account books, elegant houses, patterns from Mali, from Nigeria, from Ghana and all along the West African coast. On every tureen the faces of the unknown and unnamed black slave servants ask to be remembered.

For something that was conceived as being regional in focus, perhaps the real value has been the uprooting of this, and the recasting of perspective to one that is global in scope; further evidenced in works by Martin Hamblen, Tom Ireland, and recent Visual Culture graduate from the University of Salford Sarah McGurk. Hamblen exhibits work from his Diplomacy series of collected postcards, which depict hostage scenarios, captioned “Blindfolded, an American Embassy official is paraded before the watching world by Iranian “students” in Teheran” and “FREE AT LAST! American hostages deplane at Rhein-Main Air force Base at Frankfurt, near Weisbaden, their stopping place between Teheran and New York.” 1972 (2015), a two-channel film by Ireland, simultaneously depicts the explosions of a tower block demolition and a space shuttle as it “lifts off”. McGurk’s Dhoras go Doras (2015), are a series of small models of doors (in varying states), representing the front doors of houses in Northern Ireland, specifically Omagh, where McGurk grew up. These doors serve as representation of the normalisation of, and desensitisation towards, a violence that is part of an everyday experience.

As Things Stand (2008-14), a work by David Osbaldeston, was exhibited in Modern History Vol. I at Grundy Art Gallery, Blackpool in late April 2015, but for Modern History Vol. II Osbaldeston has created a new version of the work post-election, and in the wake of further anti-austerity cuts. He writes: “A notice is a public declaration. If language is considered an image, then it may just as easily stand as a physical object, acting for the transmission of ideas. The works are a conflation between the political and aesthetic, or perhaps better still as an oppositional ‘stand-in’ toward a perceived higher authority that is mocked and revoked.”

Christine Physick presents a series of paintings of Anfield, Liverpool, which stem from a social engagement project with the immediate community. As Premier League clubs compete against each other for pole position internationally, they create a distance between the traditional fan and their local roots. The work on show reflects two of the major sources of conflict between the club and their local supporters who have increasingly been priced out of watching live games at their local stadium. The second issue of concern in this strained relationship is the club’s proposed expansion of the ground at Anfield. These plans have brought the club into conflict with the local community as many residents have been forced to leave their homes. Those who have remained in the area have been left to cope with serious issues linked to urban blight. The work seeks to generate a debate between the club and local supporters whilst exploring many of the issues faced by both sides.

And finally, work by recent Manchester School of Art, Photography graduate Natalie Wardle, brings the small gesture into focus, drawing on the domestic environment and mundane acts, through both humour and a serious feminist perspective to explore the ‘body politic’ in Control Pant Symphony (2015). Perhaps an anthem for the conflicting times we live in.

Lynda Morris, Curator said:
“I know from curating EASTinternational that the North West has some of the best artists working in Europe today. It is still possible to be an artist who is a moral force in modern history, if you make work about the life of the people in Manchester, Liverpool, Preston, Birkenhead or Cumbria.”

Lindsay Taylor, Co-Chair, Contemporary Visual Arts Network North West, which instigated the project said:
“Since 1969 Lynda Morris has endeavoured to develop artistic talent and present new, often challenging artwork to audiences as she gave many now well recognised artists their first UK exhibitions opportunities. Through establishing EASTinternational in Norwich she exhibited work by internationally significant contemporary artists to audiences outside of London. The three exhibitions will both reflect and respect the strength and ambition of artistic talent in the North West.”

Modern History Vol. II is the second of three exhibitions, which promotes the work of contemporary artists living and working in the North West. The exhibitions will be accompanied by a programme of events.

Modern History Vol.II is on display from Tuesday 18 August 2015 – Sunday 8 November 2015. For more information about the exhibition please visit theatkinson.co.uk or by calling the Box Office on 01704 533333.