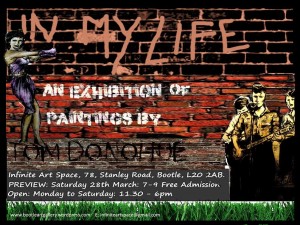 Preview: Saturday 28 March 7-9pm
Inspired by music, popular culture and the illustrations in Marvel Comics, Tom has become a well known figure in Liverpool, particularly for his works on the Beatles and the surrounding area. Growing up in Liverpool and now living near to Penny Lane, he has ample inspiration on his doorstep. Tom has built up his portfolio and works over a number of years working primarily in book illustration, mural commissions and a number of drawings combined with paintings. Exhibited and for sale will be the charming “Woolton Village Fete “prints based on the early musical years of the Beatles. Framed artworks will also be available for sale as well as prints and originals.
Tom has recently been commissioned to illustrate Marie Darwin ‘ s Beatles Story poetry books. ‘ work in progress “..also Beatles Walking tour images..These will be displayed A3 sized illustrations (those finished so far) as stand alone artworks as part of this project!
You can find more about Tom and his work at: liverpoolartgallery.weebly.com
78, Stanley Road, Bootle, L20 2AB

TAG Bootle: I am Spartacus