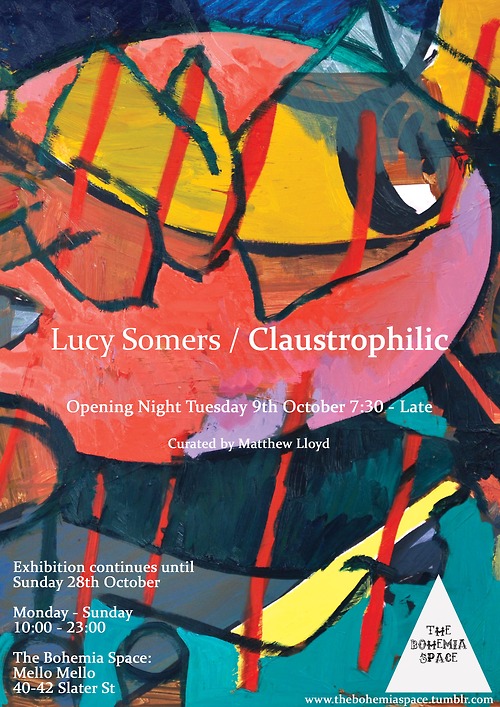 Since taking part in the Athens Biennial, I have been tentatively translating the confined hairline spaces from my paintings, into large constructions of carpet and board. At once literal, and also obscured, I like to compress my images until the only space is described by the colour. The gorgeousness of cramped enclosed spaces under a low tungsten bulb, the flickering colours in the shadows and the heavy hot light.

The recognisable objects cry out an ergonomic space; finger sized button, chair, angle-poise lamp, yet the treatment of them is crude, dead flat, intensely opaquely coloured. Where my paintings are claustro-philic, examining how colour interacts with a space that almost isn’t there, the installations tackle their own volume and space directly. Without the exact scale of the household object, I play with the scale-less surface of carpet and board, over-sizing and under-sizing shapes that could be a chair, could be the edge of a table.

One of the things that links my painting and installation work, is the desire of the viewer to read a space, volume or depth that isn’t there. A notional space that you expect but only find in the colour.

Lucy Somers recently graduated from John Moores and is continuing on the MA course, while also being a studio member at The Royal Standard. Lucy is currently running an online project called ReCurate which will also form an interactive part of the exhibition. Small scale models of well known exhibition spaces will be left in the cafe, hijacking the curation process used at Tate Liverpool, and left for people to play with and discuss the show around them.