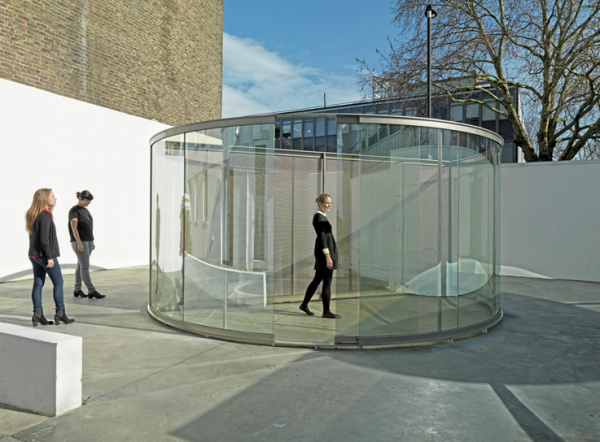 Liverpool Biennial is a major event in both the UK and international art calendars.

The Unexpected Guest explores notions of hospitality. Leading and emerging artists have been commissioned to make permanent and temporary public artworks as well as long-term community-based projects. Works by over 60 artists from across the globe unfold across the city in its major galleries (the Bluecoat, FACT, Open Eye Gallery, Metal, Tate Liverpool and Walker Art Gallery), as well as a variety of public realm sites, including The Cunard Building, the LJMU Copperas Hill Building (Lime Street), The Monro, Liverpool ONE, Everton Park and Anfield and Breckfield.

Approaching the building, Dan Graham’s 2-Way Mirror Cylinder Bisected By Perforated Stainless Steel, is encountered in the front courtyard. The structure plays with viewers’ perception and understanding of space, creating unexpected reflections and blending the division between inner and outer space. Exploring the voyeuristic act of simultaneously watching oneself and being able to watch others, the pavilion also questions how we move and operate in the public sphere: a dimension that both alienates and seduces us.

John Akomfrah’s newly commissioned film, The Unfinished Conversation, examines the nature of the visual as triggered across the individual’s memory landscape, with particular reference to identity and race. In it, academic Stuart Hall’s memories and personal archives are extracted and relocated in an imagined and different time, reflecting the questionable nature of memory itself. This multi-layered three-screen installation investigates the theory that identity is not an essence or being but instead a becoming, where individual subjectivities are formed in both real and fictive spaces.

Dora Garcia’s multi-part commission, Outside!, made in collaboration with Peter Aers, Liverpool-based community project Toxteth TV, and the Bluecoat, invites local residents to narrate their own stories of the city and its undercurrents through an experimental street TV project with a live talk show element.

Jakob Kolding’s mixed media installation has been commissioned by Liverpool Biennial.  Through sets of collected images, re-assembled to call forth new sets of meaning, Kolding analyses the notion of ‘local identity’ by challenging collective imagery and popular rituals, and the way these interplay with the City.

Sun Xun explores the cultural traditions of hospitality in his native China in a new large-scale installation of drawing and animation created in response to the Bluecoat’s gallery spaces.  Referencing Song Dynasty customs and style from the 11th century, he juxtaposes traditional and new media forms of expression to negotiate the complex position of ‘host’ in contemporary China.

LEAF: We Are Pixels