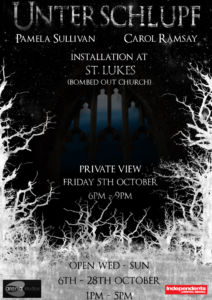 Artist’s Carol Ramsay and Pamela Sullivan present ‘Unterschlupf’ (Shelter). A two piece installation made in response to the unique space that is St Lukes church. The site specific pieces will be made in direct response to the environment, reflecting the history of the building. Sullivan and Ramsay have collaborated before with ‘Acetate Steps’ at Arena Studios

I am interested in the atmosphere and physical structure of specific sites or places and have always leaned towards exhibiting my art work in more unconventional environments. I found the history, architecture and atmospheric interior of St Luke’s fascinating. The building stands as a macabre relic that serves as a chilling reminder of the atrocities carried out during WW2. Across the world there are similar ‘bombed out churches’ left as reminders of the indiscriminate nature of war. These buildings serve as symbols of regeneration, as a testimony to the strength of real people. St Lukes stands as a shelter, no longer in a physical sense but in a supportive way to the people of Liverpool, it gives help to those who need it and to those who are trying to make a difference in the city.

My piece Aus der Asche meaning ‘From the Ashes’, uses recycled cardboard boxes (a medium often used in my work), to create a tentative structure that offers shelter for just a short period of time. The words Aus der Asche will serve as the focus of the work and will be suspended from the trees. The words reflect the history of the building, once it was a shelter for those who sort salvation now through people such as Ambrose and Liz Carlisle it has become a meeting place, a centre to support lost tourists, artists, the homeless, those with mental health issues, musicians and the archive film enthusiasts of Liverpool. The exposed nature of St Lukes will see the elements slowly destroy the piece as the cardboard disintegrates, eventually there will be nothing of the art work left. Once my piece has gone though there will be space for another piece of art to grow and develop and so the cycle continues

Carol Ramsay BEHÜTEN To guard/protect or shelter ‘St Luke’s was hit by a German incendiary device just after midnight on Tuesday 6th May 1941 and the resulting fire devastated the church leaving only a burnt out shell remaining.’ Behüten is a temporary installation offering shelter to the visitors at St Luke’s and stands in homage to the church as it was prior to this inauspicious date. This is also about the people of Liverpool taking refuge within Anderson shelters and wherever else they could to avoid the bombs during the war. The stories of some of these people will be transcribed inside the piece. Behüten is based on a Reuleaux arch, the shape of so many church windows within St Luke’s and named for Franz Reuleaux, a 19th-century German engineer.