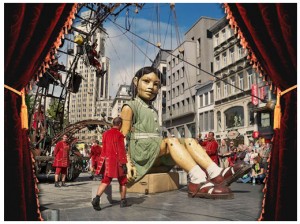 In April, the world’s greatest street theatre company, Royal De Luxe, will bring their Little Girl Giant to Liverpool in one of the UK’s most spectacular events. Sea Odyssey is a magical tale of love, loss and reunion played out on a gigantic scale. It will take place in key city spaces, moving across North Liverpool and the city centre, wowing the hundreds of thousands of people who are expected to descend on the city over the three days.

The show will take place from April 20-22 and is one of the most complex events Liverpool City Council has ever staged, involving hundreds of people in its planning and execution.

Seeing is believing, so come join the Little Girl Giant and be part of her amazing journey of discovery in Liverpool.

•
View Sunday 22 April – Both Giants Route in a larger map

Baltic Creative: “Not From Here”: Must be The Unexpected Guest!