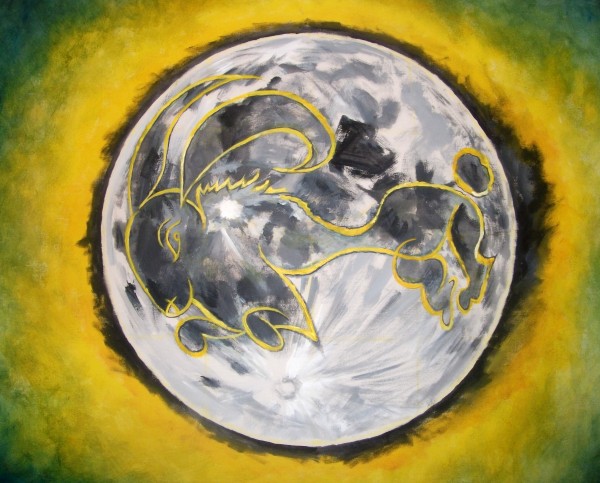 As part of the Independent strand of the Liverpool Biennial Art Festival, an exhibition of twelve paintings by artist Ali Harwood based on the ancient Chinese myth behind the Mid-Autumn Festival are to be displayed at Oomoo café on Smithdown Road in Wavertree. The story involves a talented archer, his curious wife (called Chang E) flying to the moon, and a powerful potion.
The exhibition, titled ‘Rabbits in the Moon’, will be launched on Sunday 16th September at 3pm, with some beautiful live Chinese harp music, courtesy of Yuxuan Su of Liverpool based Chinese arts and culture company China Pearl.

I was inspired by the story and when I looked up to the moon, I could see a rabbit there. This is the rabbit who accompanies the archer’s wife – the moon goddess Chang E – in the Chinese myth. This unexpected guest was a little like a Rorschach test. Each version of the rabbit emerged from the apparent seas, oceans and craters on the moon. When you look up in the sky at night, you may well see a different rabbit than the twelve on view at Oomoo.

As to why a cafe in Wavertree is being used to exhibit his work, Ali explained:

Oomoo provide great hospitality (which is the current Biennial focus), plus I enjoy their delicious homemade cakes. Also, the word ‘Oomoo’ has four moons within it and three quarters of the letters of the word ‘moon’, too. It’s almost as if it was written in the stars.

The exhibition runs from Sunday 16th September to Sunday 21st October. It spans the Chinese Mid-Autumn Festival, or Moon Festival, which this year falls on September 30th, when families to get together, think about those they love who are far away, and eat moon cakes at night.

There will also be a short poem explaining the Moon Festival myth on display at Oomoo.